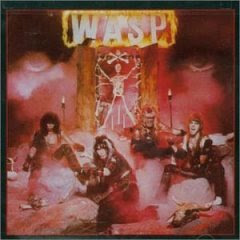 In the 1980s, metal was largely divided between the more commercial glam and hair band fans and the jeans, leather and T-shirt guys who were banging their heads to bands like Metallica, Maiden, Megadeth, Slayer and Priest. Very few bands managed to cross those lines and appeal to some fans from both sides, one of those was W.A.S.P., and with one listen to their 1984 debut, it's pretty easy to see why.

The image that W.A.S.P. brought to the stage was bizarre. They latched on to the over-the-top theatrics of Alice Cooper, drinking blood, flaming codpieces and a spinning rack with a person stretched across it. Though in recent years we've seen singer Blackie Lawless sans codpiece and saw blades and know he's a relatively normal guy, in those days, he was the terror of mothers around the world.

But putting aside the image, what W.A.S.P. delivered on record was a solid, if perhaps simplistic, product. They took a base of Chuck Berry-style rock 'n' roll and fed it steroids (and perhaps a few mind-altering substances) until it turned into a Frankenstein monster of rock, hooks and metal with enough edge to please the hardcore metal fan and enough catchiness for fans of the more commercial.

The record opens with a metal explosion on "I Wanna Be Somebody," which, in its time, was a pretty damned heavy song. That's followed by the huge, sing-along hook of "L.O.V.E. Machine." Why this song wasn't a monster hit at radio still boggles my mind. Hear it once, and it's tough to get out of your head.

To be fair, there are a few duds here. While I thought "School Daze" was a great song when I was 13, I just can't get into the spirit of it at 34. Likewise there are lyrical challenges in songs like "B.A.D." which mixes lyrics I really like - The tears that you cry leave a bloodstain/ They fall to the ground like a sweet rain - with ones that kind of make me cringe - B - A -D, bad/ Make your mom and daddy sad.

Still, there's no denying the staying power of the more solid songs here. I'll still crank "Hellion" up until it threatens to blow out the speakers in my truck, and it still has one of my favorite "rock rules" lines - The gods you worship are steel/ At the altar of rock 'n' roll you kneel. Likewise, "Tormentor," "The Flame," "On Your Knees" and "The Torture Never Stops" still hold up after all these years. There's even a nod to the times with the ballad "Sleeping in the Fire," though with lyrics that invited fans to Taste the love, the Lucifer's magic, it wasn't likely to be a radio hit.

In the years since this record and "The Last Command," Blackie seems to have fallen victim to what I often call the "inner artiste." He's gotten lost in lofty concepts and records that put story before music and largely sound the same. It would be nice to see him throw concept out the window and make a return to the kind of fun and raunchy rock that still makes those albums so enjoyable.

Listen to a sample of "Hellion."