Review: Beast in Black, "From Hell With Love" 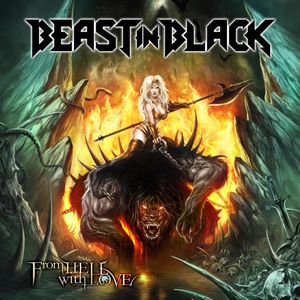 Imagine, if you will, a world where 1980s electronic pop incorporated blazing metal guitar riffs and soaring solos. I’m talking about the cheesiest songs from the Flashdance, Footloose or Rocky movie soundtracks of the early ‘80s blended with the metal bands that rose to prominence in the latter part of the decade. That’s the world inhabited by Finland’s Beast in Black.

From Hell With Love is a beautifully cheesy world of guilty pleasure. As a metal guy, I’m a bit embarrassed about enjoying this so much, but at the same time I’m bobbing my head and belting out the lyrics at the top of my lungs.

Do you fit in this world? To answer that question, just hit play on the title track, “From Hell With Love.” You’ll soon know. My progression went something like this:

• First verse – “Man, how cheesy can you get?”
• Second verse/chorus – “But it’s really catchy.”
• Chorus after the solo – *head banging* “Another voiceless cry / another hopeless try / I wish you’d open your wings and take me inside …”

About 10 repeats later, I finally gave in to my inner ‘80s child and bought the record. I have no regrets.

Though I doubt that any member of the band is old enough to remember that decade of my youth, they are definitely students of its music. The combination is often strange, but always a lot of fun. That’s perhaps best illustrated by “Die by the Blade.” The song blends fantasy-themed power metal lyrics with over-the-top synths that I immediately associate with the motivational workout scene from most any early- to mid-1980s movie. It’s funny to imagine the down-and-out character pulling him/herself up and pushing to be better while the lyrics are telling them to “fight until you die by the blade of the one you hate.” Yet, in a way, it’s oddly appropriate.

“True Believer” follows a similar track, but actually falls lyrically more in line with those 1980s songs with a tale about overcoming people trying to hold you down. Although, it is a bit more literal here and ends with the subject of the song overcoming evil perhaps a bit more violently.

“Sweet True Lies” with its big harmonized vocal hook plays like a mix between a boy band and 7800 Fahrenheit or Slippery When Wet-era Bon Jovi. Among the pop/metal mixes, “Heart of Steel” is a favorite of mine, perhaps surpassed only by the title track. It’s like one of my favorite current power metal bands, Gloryhammer, decided to cover a Survivor song from a Rocky soundtrack, and it’s glorious.

Speaking of Rocky soundtracks, there’s a reason I’ve mentioned them three times now, and that is album closer “No Easy Way Out,” a cover of Robert Tepper’s song from the Rocky IV soundtrack. This rendition features all of the song’s 1980s glory, and it’s a perfect way to wrap up From Hell With Love.

It’s not all about that blend, though. There are a few songs sprinkled throughout the album that lean a little more toward straightforward power metal. Beast in Black’s very-1980s titled “Cry Out for a Hero,” which opens From Hell With Love, owes much more to Judas Priest than anything else, though the chorus does have an admittedly pop touch. That Priest influence also shows up on “Repentless,” particularly from vocalist Yannis Papadopoulos, who shows great range on this album, moving from smooth poppy harmonies to piercing screams with ease.

“This is War” is just a fantastic metal song, influenced by Manowar with a lyrical nod to them as well. The galloping riffs of Beast in Black’s Anton Kabanen and Kasperi Heikkinen set the stage, and the dramatic gang vocal chorus chant of “This is war” should induce chest pounding in any true metal fan.

The only place that From Hell With Love doesn’t fare so well is on the second cover, Motorhead’s “Killed by Death.” It’s not bad, but it’s just hard to cover Lemmy, and it doesn’t seem to sit well with the rest of the tunes on the album. Still, I can’t knock Beast in Black for paying tribute to a legend.

From Hell With Love presents a perfect storm for me. It’s my entire musical childhood – both the sounds I loved and those I didn’t – all wrapped up in a fantastically fun collection of 13 songs that I enjoy more with every listen. It’s early in the year with a lot of records left to come, including my most-anticipated third album from Gloryhammer, but the bar that I will judge all 2019 power metal albums by has been set by Beast in Black.