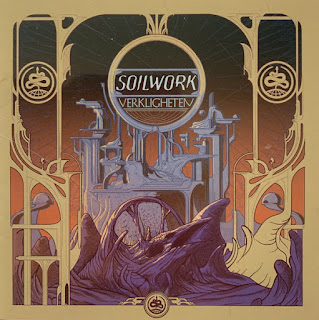 Unfortunately, evolution can be a difficult and dangerous thing for a metal band. Any change in sound in the genre is often met with a swift and ugly response from a large portion of the fan base.

If there’s a template for the way to evolve gracefully, it might belong to Soilwork. That’s not to say that they haven’t seen the backlash as they’ve moved from the Gothenburg death-metal sound to something more melodic and accessible, but they’ve weathered it better than others and continue to pump out great albums. Their latest, Verkligheten (which translates to Reality in English), is no exception.

One of the reasons that Soilwork has been able to successfully evolve their sound is that they’ve never forgotten where they come from. Yes, they’re going to give you some big hooks and hummable melodies, but you’re also going to get a blast of heavy on most songs and, on most albums, at least one brutal melodeath track.
Where they shine is when they put it all together in one song. That would be “Full Moon Shoals” on Verkligheten. It opens with a catchy guitar riff, and the verses and chorus are in a very mainstream rock style that puts the spotlight on vocalist Bjorn “Speed” Strid’s versatility. The chorus hook is fantastic and gets punctuated by Strid ramping up to a roar. Just before the three-minute mark, the song explodes into melodic death goodness with breakneck riffs, blast beats and screams. Then it drops back into that big chorus for the close. It’s a neat capsule of everything the band has to offer.

There are strong entries here from both the heavy and melodic sides.

Album opener “Arrival” blasts out of the gate with something more akin to Soilwork’s early death metal sound, but the bash-you-over-the-head moment comes on “When the Universe Spoke.” It delivers a relentless pounding to the listener from drummer Bastian Thusgaard, who replaced long-time drummer Dirk Verbeuren when he left to join Megadeth. In the beginning of the heavier section, it seems that the blast beats might overpower things, but the band, as usual, finds a nice a balance and turns this into a fantastic tune.

On the mellower side, “Stalfagel” (“Steel Eagle”), may tweak certain fans a little. It’s a very mainstream-sounding rock track with little if any of their death-metal heritage. That said, it’s far better than pretty much anything you’ll find on rock radio, and after a couple of listens, it sticks in your head. “The Ageless Whisper” features a clean opening that has almost a little bit of a bluesy feel creeping in around the edges, that also comes back during the interlude and solo. The heavier influences are certainly there, but they take a back seat to the melodic aspects.

Somewhere in between fall tracks like “Bleeder Despoiler,” which features a heavy, thrashy rhythm riff from Sylvain Coudret, but with some classic hard-rock overtones which are accentuated by David Andersson’s leads. That feel really shows up on “The Nurturing Glance,” which leans on the classic-rock sounds of Strid’s other project, Night Flight Orchestra. The song has a great intro and sounds like it’s headed into heavier territory before they shift to an ‘80s-influenced rock riff that brings yet another different vibe to the record.

“The Wolves are Back in Town” and “Witan” are what I would consider prototypical Soilwork songs – heavy riffs and verses with catchy, melodic choruses. It’s the sound they’ve made their name on since 2002’s Natural Born Chaos.

The only real disappointment on Verkligheten for me was “Needles and Kin,” and that only because it featured Amorphis vocalist Tomi Joutsen. I love Soilwork and I love Amorphis, and I was expecting so much more from that collaboration. It’s not a bad song, it just didn’t live up to my probably unrealistic expectations.

No doubt there are fans out there that would like to hear Soilwork keep remaking Chainheart Machine (2000) or A Predator’s Portrait (2001) or to have 12 versions of “When the Universe Spoke” on this record. I get that, but I don’t truly understand it. Unlike another Gothenburg band I could mention (though the songs coming off their new album sound promising, too), Soilwork has never strayed from their roots, just expanded their horizons.

Verkligheten is one of the most varied records that the band has done. Nearly every track has a different feel, but it’s all undeniably Soilwork, and I absolutely love it.