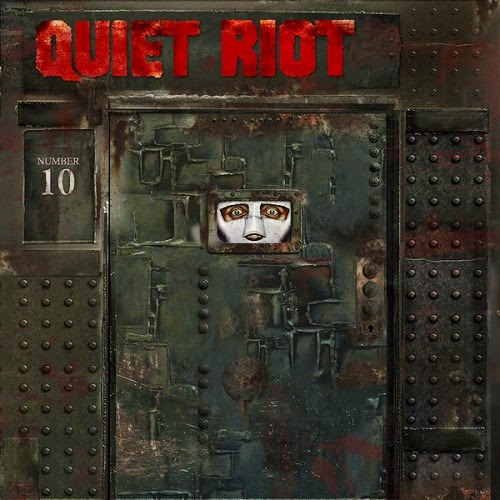 Quiet Riot’s first album since the death of frontman Kevin DuBrow arrived recently with little fanfare or, really, even any warning for fans.

First thing’s first, and that’s the rant that you knew was coming. Drummer Frankie Banali is the only remaining member from the band’s classic Metal Health lineup, and this isn’t really Quiet Riot. It’s a group of guys with a connection to Quiet Riot going out and playing those songs. I realize Banali was a part of the band’s most successful period and, aside from a stint with W.A.S.P. has been with Quiet Riot pretty much continuously since 1980. He had a major hand in writing those songs and has every right to continue to perform them. I still get grumpy about it. Sorry.

Rant done. Now I can talk about the record, which features six new songs with Banali, bassist Chuck Wright (who has done a few tours of duty with QR), guitarist Alex Grossi and perpetual replacement singer Jizzy Pearl (Love/Hate, Ratt, L.A. Guns). Banali went through a string of short-term singers before settling on Pearl, and from what I heard of the others on YouTube videos, he does seem to be the best fit. DuBrow’s distinctive voice is difficult to replace, but there’s just enough of his tone in Pearl’s to make a connection.


The album opens with “Rock in Peace,” which is also the first single and probably the strongest piece of new material. The guitar riff from Grossi is not a bad 1980s hard-rock lick, and Pearl sounds pretty good on the verse. There’s a feel of some of Quiet Riot’s older material to it. Lyrically there are probably a few too many nods to that past and an obvious attempt to tie the song to Metal Health. The chorus is pretty rough with the gang vocals, which at times sound unfinished. All in all, though, it’s not bad.

I have to give credit where it’s due to Grossi, who does deliver some memorable riffs — even when the songs don’t bear them out. “Band Down,” for example, opens with a great big rock ‘n’ roll riff that gets your head bobbing, but the chorus is as plain as beige wallpaper and largely forgettable. There’s another heavy lick hiding in “Backside of Water,” too, but not enough punch to the rest of the tune.

One of the most energetic performances comes on “Back on You,” with Banali setting the pace early on and Grossi throwing another one of those riffs at the wall. Like most of this record, “Back on You” is very much of the 1980s, but this one’s pretty catchy.

My favorite Grossi riff comes on “Dogbone Alley” – a nasty, down and dirty rocker that’s a bit darker than anything else here. Unfortunately, Pearl can’t really carry the vocal as the song goes in that direction, his voice seeming more suited to the party-ready songs to be found elsewhere on the record.

One thing that I do like a lot about the record is the DuBrow live performance. The songs are rough and unpolished, sounding more like a high-quality bootleg than the standard slickly produced live album.

At the end of the record, I’m left with a very bittersweet feeling. As I’ve always acknowledged, Quiet Riot is the reason I’m a hard rock and metal fan. They were my first favorite band, and if not for Metal Health and Condition Critical, who knows what musical path I would have taken?

The final performance with DuBrow is certainly special, shining even in the occasional roughness of the recording. The new studio material shows some potential, but it never quite comes together. There is, I think, a little too much pressure to try to make it sound and feel like Quiet Riot instead of acknowledging that these are different guys in a different time and pushing forward.

I don’t begrudge Banali the right to continue performing the songs that he wrote or doing what has been his life’s work, but this, to be honest, is not how I want to remember a band that was so important in my life. I’d rather hang on to those old records, and the re-energized live performances of the Metal Health lineup that I finally got to witness nearly 20 years later when they reunited.