Review: Metallica, "Through the Never" 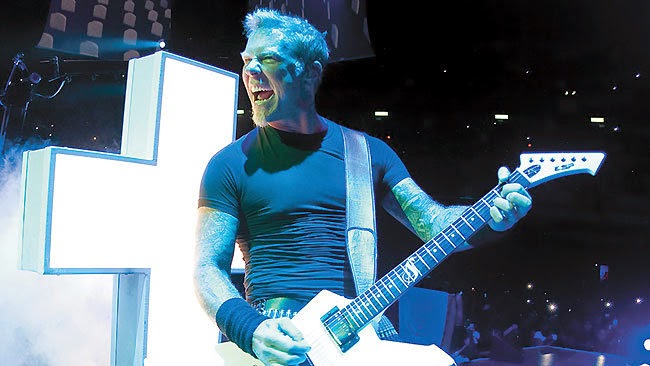 So, I’m just getting around to checking out the Metallica “movie” since it hit Netflix, and it’s a bit of an odd beast.


The setup for the film is a huge Metallica show where a young fan (Dane DeHaan) is working behind the scenes as a roadie. He’s pulled from the arena as he sings along in the middle of the band’s opening number “Creeping Death,” because a truck carrying something important to the show has run out of gas. His job is to get gas to the truck and get it to the arena. That’s when things get weird. As Metallica continues to play, we get cut scenes of DeHaan’s adventure as a fleeing driver slams into his van, overturning it and leaving him on foot in a surreal, chaotic city landscape where a strange hammer-wielding horseman in a gas mask seems to be leading some sort of rebellion.

Designed to be part big-budget concert film and part action-horror flick, Through the Never succeeds more as kind of a very long-form music video than either of those things.

For Metallica’s portion of the film, you get a nice set that leans heavily on their earlier material, but also offers nods to the Load/Re-Load era (“Fuel,” “The Memory Remains”) and Death Magnetic (“Cyanide”). The stage show features just about every gimmick they’ve ever done or wanted to do combined. There’s an electric chair powered by Tesla coils during “Ride the Lightning,” lit headstone crosses rise from the stage during “Master of Puppets,” and everyone’s favorite crumbling Lady Justice statue comes out of retirement for “And Justice for All.” There’s even a portion where they strip back to Kill ‘Em All-style basics for “Hit the Lights.” Oddly, “Through the Never” is not on the setlist.

You can’t really review this as a live performance, since the musical portion is obviously very scripted to go along with the storyline and polished to perfection. That said, it’s a good set list and enjoyable as semi-live music videos.

From the storyline perspective, DeHaan’s character is likeable, though not really developed at all. It presents an intriguing, if a bit implausible scenario, but really doesn’t give the viewer enough to really sink teeth into. The storyline is cut into the music fairly seamlessly, and I particularly liked the scene where the riot cops are banging their night sticks against their shields in rhythm with the opening of “Wherever I May Roam.” Which, of course, brings us back around to what is center stage in this film, and that’s the music of Metallica.

I think director Nimród Antal’s idea was to leave as many details to the viewer’s imagination as possible, and by the end, we’re left with an interesting set of vignettes without many answers or explanations. That’s what ultimately makes it feel more like a very long-form music video than a movie.

I’m sure there are people out there who could come up with some sort of deep detailed interpretation of “Through the Never.” I’m just as sure there are others sitting around scratching their heads. And maybe that was the intent. Me? I just enjoyed it for what it was — great tunes, cool visuals and a nice way to kill an hour and a half or so.

Posted by Fred Phillips at 8:34 PM