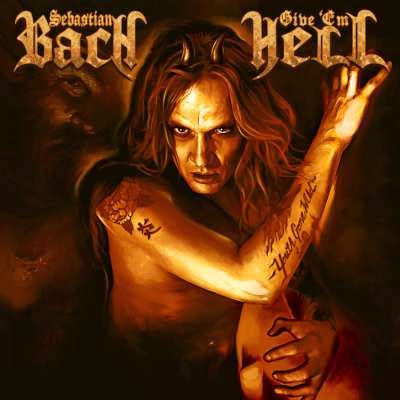 The results are much the same, though — a lot of tough, gut punch guitar riffs that aren’t always borne out by Bach’s vocal melodies.

While I’ve quite enjoyed most of Bach’s solo records, and Give ‘Em Hell is no exception, I voice the same annoyance with each one. In his desire to show off his range, he has a tendency to take a gnarly metal tune with great promise and soften it with a lilting, soaring chorus.


Granted, it can work for him. I have to look no farther than one of my favorite tracks from this record for a perfect example: “All My Friends are Dead.” The song comes out of the gate with this ominous build up into one of the coolest riffs on the record. The verse quiets down a bit, but remains very dark. Then we take a left turn into a very poppy chorus melody, but it’s quite catchy and Bach’s scream on the end leading back into that awesome riff punctuates it perfectly.

Other times, it doesn’t work so well. The dark, spacey power ballad “Push Away” is great right up until the high falsetto chorus, which is way over the top and, for me, comes up just short of nails on a chalkboard. But that’s Sebastian Bach. If you’ve followed his career, you know that there’s more than a little bit of diva in him, and you have to take the good with the bad. Luckily for us, there’s far more good than bad on Give ‘Em Hell.

One of the absolute best moments on the record comes when Bach takes a little detour from what he’s done before. “Rock ‘n’ Roll is a Vicious Game” is a classic rock ‘n’ roll anthem in the vein of Bad Company’s “Shooting Star.” Bach sings the story of a wannabe rocker’s rise and fall over a strummed acoustic guitar and harmonica, punctuated by some slashing electric power chords on the chorus. There’s nothing fancy about the song, and Bach doesn’t try to reach too far in his vocals, but it’s just a solid, classic-sounding tune.

Despite a few departures, Give ‘Em Hell is about hard-driving heavy guitar riffs, as evidenced right from opening track and first single “Hell Inside My Head.” Admittedly, it is one of the tracks with that chorus thing going on, but Bach rescues it with the screamed “this is my time, I’m rising” on the end.

“Temptation” grooves with another heavy riff and a nice dark feel on the verse, and there’s almost a grungy feeling to the chorus. “Gun to a Knife Fight” rocks hard and features one of Bach’s most aggressive vocal lines on the record, while “Harmony” has a bit of a punk flavor.

“Disengaged” might just be the heaviest track to be found here. I really like the vocal melody on it, and it’s one of those instances where the heavy verse and lighter chorus really meld well.
Of course, we need the dumb sex song, and that comes on “Dominator,” Bach’s ode to bondage. The song opens quite nicely with a very catchy, fast guitar riff. Then we get to the chorus, which kind of annoys thanks more to the lyrics than the music. But there’s a big crunching heavy part right before the guitar solo and again at the end of the song that’s really nice and leaves me with very mixed feelings on the track.

Outside of Bach’s usual quirks, Give ‘Em Hell is a really good album. At times, it leaves me longing for the raging, snarling Slave to the Grind-era Bach, but that can be said of most of his solo work. I still think 2011’s Kicking and Screaming is his best solo effort so far, but this one is close.

Posted by Fred Phillips at 4:00 AM