Review: Shooter Jennings, "The Other Life" 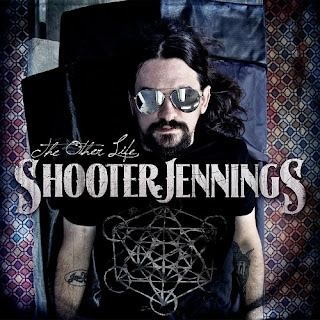 You never know quite what to expect from Shooter Jennings. It drives some fans crazy, but it’s part of what others, myself included, like about his music.

Will it be country, rowdy Southern rock, experimental art rock, hard rockers, heartfelt and serious songs, crazy and sometimes silly numbers? The answer on The Other Life is yes.

Really, for the first time in his career, Jennings has brought together all of the various sounds from his past, and it feels almost like it’s the first album that is fully and truly his musical voice.

Last year’s companion piece, Family Man, focused on just what its title said. Every song had something to do with family. This one focuses mostly on life on the road and the music business.


Considering the fact that Jennings took great pains to make Family Man as country as he could, The Other Life starts on a strange note with “Flying Saucer Song.” The slowly building piano echoes the one from “Wake Up!” which opened his experimental rock album Black Ribbons. It builds into this Pink Floyd-esque number with Shooter asking through spacey vocal effects, “do you know who you are?”

From there, we take a sharp turn on second track “A Hard Lesson to Learn,” which melodically is very much in the vein of his father’s work — if, that is, Waylon had played late-1960s psychedelic rock. Somehow, though, the juxtaposition of honky tonk and spaced-out guitars works like a charm.

Those two songs set the tone for the rest of the album, which Shooter never tries to make coherent or uniform, but somehow, at the end of the day, it is.

There’s plenty of the rowdiness that he introduces on “A Hard Lesson to Learn.” He and Scott H. Biram have a rip-snorting good time on the hillbilly rocker “The White Trash Song.” Then there’s a hot Southern rocking tale from youth, “The Low Road,” that finds the subject busting in a schoolyard bully’s teeth with his Skeletor lunch box, taking his dad’s advice that if the high road is closed, “sometimes you gotta man up and take the low road around.” “Mama, It’s Just My Medicine” finds Jennings in 1970s rock mode with shades of Steve Miller bleeding through.

Shooter’s anti-Nashville anthem “Outlaw You,” which was issued as a single prior to the release of Family Man, finally puts in an album appearance here, and it’s a welcome addition, fitting in pretty perfectly with the theme of the record.

The king of rowdy himself, Black Oak Arkansas’ Jim “Dandy” Mangrum joins Shooter on “15 Million Light-Years Away,” a gruff, dark tune that mixes 1970s hard rock and country influences, heavy on the organ. It’s a track I wasn’t sure about on first listen, but after a few times through, it won me over.

Balancing out all the uptempo, rocking and fun songs are a couple of standout softer numbers. The first, “Wild & Lonesome,” a duet with Patty Griffin, might be the best pure country song that Shooter has ever recorded. He and Griffin sound great together, and it’s also one of the best written songs on the album as Jennings laments a drifter’s life of missed opportunities.

The title track covers similar ground as the subject wishes that he could trade his life on the road for the woman that he lost. It’s a soulful performance for Jennings, and the mournful piano and wailing fiddles set the perfect tone for the tale.

And that brings me to perhaps the strangest, but certainly the most compelling track on the record. “The Gunslinger” is a six and a half minute opus that closes The Other Life. It opens with a country-like strumming guitar. Then Shooter comes in with an almost rap-like delivery, some braggadocio-filled lyrics and a profane chorus right out of a Kid Rock song: “Don’t call me an outlaw, I’m a motherfucking gunslinger, you wanna run your mouth all day long, you better keep your eye on my motherfucking trigger finger, do you feel me punk?” But somehow, as laughable as they seem, Shooter’s delivery makes them work.

Then, about halfway through, we get another jarring moment with a saxophone solo. Again, you’re thinking, “damn, this doesn’t work together at all,” but again, it does. The sax comes back strong as the song fades out, and there’s about two more minutes of that funky, weird Pink Floyd vibe that we started out with as the album fades away. It’s all wrong, and at the same time, all perfectly Shooter.

This is an album, perhaps his first, where Shooter Jennings doesn’t try to please anyone but himself, and as a result, we get the first record that’s completely him. There’s the Southern rock sound, there’s country in the vein of his dad, there are a few heavy moments, and there’s even the weirdness. At this point, I’m not prepared to say that The Other Life is Shooter’s best record because I’m still a hardcore fan of Electric Rodeo, but there’s not a single song here that I don’t like, and in time, it could very well become my favorite. Regardless, it’s easily among Jennings ’ best work and far and away the best album I’ve heard so far this year.

Posted by Fred Phillips at 6:43 PM