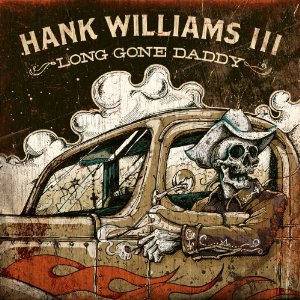 After years of battling with Curb Records to have his albums released, Hank III finally broke free from his contract a little over a year ago. Now, it seems Curb has no problem releasing his records.

This is the second they’ve put out since he left, following up last year’s Hillbilly Joker, a rock album they refused to release when it was recorded in 2003.

Long Gone Daddy wasn’t quite as contentious as that release. It collects some songs from III’s earliest recording sessions, along with tunes that he did for various compilations while he was at Curb. There are a few originals, a few alternate takes, a few covers of his grandfather’s songs and a few covers from other artists. All in all, it’s a collection that should please fans who have been turned off by his flirtations with rock and metal. And, if I’m being honest, even I have to admit that it’s better than some of the records he’s turned out in recent years.

I’ll start out with the “new” songs and alternate takes. These are mostly good. “Sun Comes Up” is firmly rooted in his grandfather’s sound and wouldn’t be out of place on either of his first two records. “The Wind Blew Cold” opens with an Allman Brothers-style guitar lick before dropping into an uptempo classic country number. It’s one of my favorites on the album. “This Ain’t Montgomery,” a duet with Joey Allcorn, originally appeared on Allcorn’s 50 Years Too Late. It’s a good song, but for me would have been better as a III solo tune. “What They Want Me to Be” is just an alternate take of “Trashville” from the Lovesick, Broke and Driftin’ record that adds a little more rock.

The only really out-of-the box piece is “If the Shoe Fits (Shuffle Mix),” which takes the very traditional song from Risin’ Outlaw and puts it over a funky beat. I didn’t like it on first listen, but after a few spins it grew on me big time.

There’s a mixed bag on the other covers. A version of Johnny Cash’s “Wreck of the Old 97” is the best of the three, particularly after it kicks up the tempo into that chugging signature Cash sound. Much like on his version of “Cocaine Blues” from his first album, that sound suits III. Waylon and Willie’s “Good-Hearted Woman” presents a little more of a challenge. It’s not a bad cover, but it’s a bit rushed and, obviously, can’t match the interplay the two legends had.

The only true miss comes with Merle Haggard’s “The Bottle Let Me Down.” Instead of trying to turn it to his own sound, III tries to adopt a Haggard-style vocal, and it just doesn’t work very well for him.

Much like Hillbilly Joker, I’m a little torn on this record because of the circumstances surrounding its release. Long Gone Daddy does, however, satisfy that craving for the neo-traditionalist sound of III’s earlier records and, “The Bottle Let Me Down” aside, there aren’t many disappointing moments on this compilation.