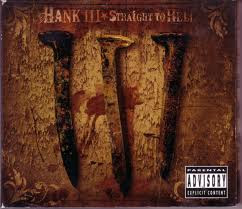 If I went back for my whole life, 2006 would probably be the only year that a country album would lead my best-of list. For 2006, though, my top two records are country.

If I had to pick the best record for the first decade of this century, it would be tough to not pick Hank III’s Straight to Hell for its impact on me, personally, and on the underground country scene in general.

While Johnny Cash’s American Recordings in 1994 was the album that reintroduced me to country music and opened me up to listening to some of the classic artists of the genre, it was Straight to Hell that led directly to my discovery of artists who are playing a more traditional form of country today.


Straight to Hell was really the first time that III’s true personality came out on record. Sure, we saw glimpses of it on his previous two albums, but he spent much of those trying to walk in the huge boots of his grandfather. This album, released after some legal wrangling, maintained the spirit of his grandfather, threw in a little of his dad’s rowdier sound and had an attitude that was all his own.

To me, it’s arguably the most important country music release of the last decade, as it helped give a kick start to the growing underground country music scene today and showed a new generation of country artists that you could be yourself in your music rather than pandering to the plastic pop that Nashville is shoveling out. Give me a drink with some “Country Heroes” any day over a “country” girl shaking her ass for the squirrels, or whatever.

2. Shooter Jennings, Electric Rodeo. There was a little more rock in Shooter Jennings’ second outing, but it remains my favorite of his records. Some folks were disappointed that it wasn’t quite as country as his debut (but if you honestly listen to it there are plenty of rock moments on Put the O Back in Country), but I thought he struck the perfect blend. “Bad Magick” is far and away one of my favorite songs of the past decade.

3. Lamb of God, Sacrament. Here’s another record where I really don’t agree with the majority of fans. Many fans of the band’s earlier records thought the more melodic direction on Sacrament was a move in the wrong direction, but that’s what drew me to it. It’s still my favorite from their catalog.


5. Into Eternity, A Scattering of Ashes. With time, probably my favorite Into Eternity record, the band found the perfect balance between the extreme and melodic influences to deliver some very memorable songs.

6. Rebel Meets Rebel, Rebel Meets Rebel. More country? Well, sort of. Outlaw country legend David Allan Coe's pairing with members of Pantera was a long time in coming, but didn't disappoint. It's everything you'd expect from a team-up between metal's Cowboys from Hell and the original cowboy from Hell.

7. Trivium, The Crusade. Yep. Another one of those. Most Trivium fans hate this album with its 1980s thrash inspiration, but I, quite frankly, don’t care for the monotonous grunts of earlier records. I like the infusion of melody and a nod to bands like Metallica and Testament. I don’t like it nearly as much six years later as I did when it came out, but there are still some songs I love on it.

8. Scar Symmetry, Pitch Black Progress. This album hit me hard at the time. I loved the mix of melody and heaviness. For some reason or other, their following records haven’t quite hit me as hard, but I still love this one.

9. Beyond Fear, Beyond Fear. I’ve grown a little more fond of this project from Tim “Ripper” Owens as it has aged. I thought it was a little generic when it was released, but now I like it. I’d like to see a follow-up.

10. In Flames, Come Clarity. Having been disappointed with Soundtrack to Your Escape, Come Clarity was something of a return for In Flames for me. They’ve always been a band that occupies a weird space in my listening, and this one is no different.

11. Queensryche, Operation: Mindcrime II. It’s nowhere near as good the original, obviously, but it’s the best record Queensryche has put out since Empire.

12. Slayer, Christ Illusion. I got caught up a little bit in Lombardo mania when this record came out, and I thought it was great. I still like it, but it hasn’t held up quite as well for me.

13. Jon Oliva’s Pain, Maniacal Renderings. This is the weakest of the JOP releases in my mind, but it deserves a spot on this list for “Return of the King” alone.

14. Strapping Young Lad, The New Black. SYL was always solid, and I always enjoyed their records. For some reason, I never became a huge fan, though.

15. Edguy, Rocket Ride. This album was a little different for Edguy – a fun, kind of goofy tribute to hard rock. That’s why I like it.

Posted by Fred Phillips at 2:49 PM