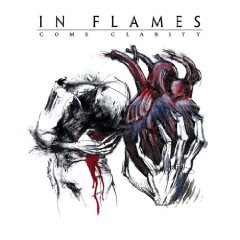 On their past two albums, In Flames have searched for a sound that seems to be just out of their grasp -- something between their melodic death metal past and a more modern style of melodic metal. It started with "Reroute to Remain," which took the experimentation of 2000's "Clayman" even further, throwing more clean vocals and more keyboards into the mix. A lot of fans didn't like it, but I personally thought it was a daring move on their part, and I still think it's a very good album.

Then came "Soundtrack to Your Escape," which seemed to try, at the same time, to fuse the sounds of the previous two albums and simplify the music even further. I initially gave it a decent review on a quick turnaround, but after listening to it for a week or two grew bored with it and now consider it by far the band's worst effort. Given only a couple of days to listen to "Come Clarity" before writing this review, I hope I don't make the same mistake here. I don't think I will.

My first impression of this album is pretty damned good. It retains a lot of the melodic elements that were found on "Reroute to Remain" and, at times, also dips back into the band's early sound that many fans long for. For those of you hoping for a return to the sound of "Jester Race" or "Whoracle," stop reading this review and move on. You won't get it here, and unless I miss my guess, you likely never will.

One thing's obvious about this album, from the switch to Ferret Music to the overall sound of the record, everything's been designed to open the band to a new and wider audience. There was a time in my life when I would have gotten mad and screamed, "you should make music for the love of it and not worry about the money." I'm older now and less idealistic. I've got no problem with them trying to make a couple of bucks, especially when the music isn't compromised, and here, I don't believe it is. While there are some commercial touches here and there, you're still not going to be hearing this on FM any time soon (and if you do, let me know because you've got a cool station and I'll take it into consideration if I ever think about relocating.)

"Come Clarity" grabbed me with the head-bashing opening riff of "Take This Life," also the first single, and I immediately noticed the return of guitar solos to the album. That's something I sorely missed on the previous record. "Take This Life" is easily better than anything on "Soundtrack to Your Escape," and it's actually one of the weaker songs here. The following tracks, "Leeches" and "Reflect the Storm" are where you'll start hearing some of the older sound. In fact, to me, "Reflect the Storm" is, structurally, almost like a return to the old style, as is "Pacing Death's Trail." There are also a few shots for fans who liked the last two albums. "Crawl Through Knives," another of my favorites, features a heavy vibe from "Reroute to Remain."

My current favorite track on the record is "Dead End," which features female vocals by Lisa Miskovsky, who I found out, with a little research, usually sings folksy acoustic music and has co-written a song for the Backstreet Boys. Sometimes it's better not to know too much. That almost made me rethink how much I like this song. Suffice it to say that this song is a far, far cry from her normal work. While her voice does lend a certain mainstream aspect to the song, it's not a bad thing at all. It puts me in mind of a heavier Lacuna Coil, with a little more emphasis on the male vocals (though I'd take Cristina Scabbia over Miskovsky any day).

Cruising the Internet, I've read a lot of complaints about the song "Scream," but I don't think it's that bad. It's got a cool thrashing opening riff, and while I'll admit that the chorus is a little weak and the lyrics perhaps lack some creativity, I don't quite get the hatred that some fans seem to have for the song. Certainly "Scream" is one of the more commercial-sounding tracks, but again, the obvious theme here is reaching a wider audience. I can't really fault them for that -- and the song's better than most of the stuff in the same vein.

The weakest tracks for me are the title track, which with Anders Friden's slightly digitized vocals, comes off sounding like a bad Marilyn Manson ballad, and "Your Bedtime Story is Scaring Everyone," which unfortunately hits a pet peeve of mine -- the pointless, elevator-music like instrumental (or in this case, semi-instrumental) to close an album.

"Come Clarity" isn't just a big step up from "Soundtrack to Your Escape," it's miles beyond it. It's certainly the band's best effort since "Clayman," and possibly since "Colony." The guitar work of Jesper Stromblad and Bjorn Gelotte here is more along the lines of what fans of In Flames expect, as is the drumming of Daniel Svensson, with perhaps a couple of exceptions. As for that sound the band's been looking for, I won't say with certainty they've finally found it with this album, but if not, they're damned close.