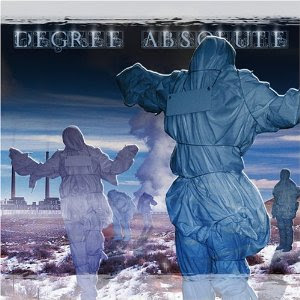 Since I have to come up with Top 10 lists for several outlets at the end of the year, I keep a running list of candidates. I hear so many records during the year that, in December, I often forget albums that I really liked in January. In the first month of this year, I've been fortunate enough to add two records to the list of potential candidates, the latest from Seven Witches and this album.

I went into the debut from Degree Absolute expecting a pretty standard collection of wannabe Dream Theater songs. Guess you shouldn't judge an album by its cover and the fact that some of the members graduated from Berklee.

What makes this album a breath of fresh air in the progressive metal genre is its noted lack of overpowering keyboard lines. I didn't know that was even possible these days, but you'd be hard-pressed to find any keyboard at all on this offering. Certainly, Degree Absolute does fall into a little Dream Theater worship here and there, but what progressive album hasn't since Images and Words was released?

The fact is that there's just as much thrash and jazz as progressive in the band's sound, and they get a nice mix of fast and aggressive, slow and melodic and some very cool jazzy interludes. There are even some odes to classic metal, like the Iron Maiden-meets-Rush breakdown on the opening track "Exist."

Formed in 1999 by singer/guitarist Aaron Bell, the band was an attempt to marry the sounds of Watchtower and Fates Warning. With more than six years between the formation and their debut album, you can still hear that inspiration. There's plenty of both bands in this album, but the result is music that sounds like neither band.

Bell's guitar riffs are tight and catchy, and he and drummer Doug Beary create some dynamic heavy moments. The slower songs, while given some cool, spacy guitar pieces, tend to rely more on Bell's voice, which is a fairly standard prog voice. It's not bad, but doesn't blow you away, either. Still, even a ballad like "Confessions" is lifted well above the mundane by some
great musicianship and smooth guitar work.

The only weakness on this record is really when the band turns to more ambient pieces, like "Half-Man, Half-Biscuit." It may be a great example of the ambient genre, but to be honest I just don't get it. To me, it sounds like a bunch of white noise with the occasional guitar riff, and I'd much rather hear some incredible riffs and runs, as on "Pi," which is a beautiful mix of the jazzy and heavy. There's also the untitled six and a half minutes at the end of the record that's completely white noise, which I find a bit annoying. Give me another song or just end the record.
Putting those two pieces aside, 47 of the 57 minutes on this album are incredible and should excite any fan of great musicianship.

Get "Degree Absolute."
Posted by Fred Phillips at 10:47 PM