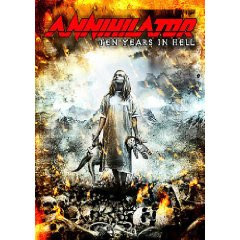 Sometimes it amazes me how the music industry has kept itself alive this long. Think about it for a minute. Think about all the great bands you know that have been left to languish in obscurity, and then think about all the crap that gets pushed on listeners by the record companies. I pondered this often while watching Annihilator's latest DVD, a retrospective of the band's early years from "Alice in Hell" through the reunion of three-fourths of that band for "Criteria for a Black Widow."

As I watched Jeff Waters shred his ass off for a couple of hours, I kept wondering why didn't this band ever reach the status of, say, a Metallica, Megadeth or Slayer? It certainly wasn't for lack of talent or, at least in the early going, originality. Maybe they arrived on the scene too late. Maybe it's because Waters is Canadian, not exactly a metal hotbed. Maybe they just weren't promoted right. Whatever the reason, it's a shame.

That's not to say that everything Waters has recorded has been gold. He's done his share of crap, and there's a testament to it here with the video for the ballad "Only Be Lonely." But there's no way you can sit there and watch him play and not be impressed.

The more interesting disc of this DVD, to me, is the first one. It follows the band from the release party of "Alice in Hell" through various TV appearances, live bootlegs and official videos. It takes you through the whole saga, with Waters changing personnel more often than Spinal Tap changed drummers. In fact, it's funny to listen to the early interviews from around the time of "Alice" and "Never, Neverland," where Waters is talking about how it's been basically a one-man show up to that point, and he's excited about getting other band members involved in the next album. Now, 15-plus years later, we know it's always been just him doing his thing. So much for those plans.

The TV interview clips provide a great deal of comic relief on this DVD, as we see time and again interviewers who have no clue who this band is trying to discuss their music. The absolute funniest moment comes from a Canadian morning show where the interviewer is completely clueless and obviously can't even understand why anyone would listen to the music. He asks some classic questions like "Why do you have to play so loud?" and, in introducing the video for "Alison Hell," "Why do your song titles have to be so mean and nasty? Why not 'Alice in Wonderland?'" Though Waters handles it professionally, you can see in his eyes that he'd like to choke the guy.

The video focuses mainly on the first two albums, "King of the Kill" and the 1999/2000 reunion with "Alice" vocalist Randy Rampage and drummer Ray Hartman. Precious little time is spent on "Set the World on Fire" and almost no time on the first disc is given to "Remains" or "Refresh the Demon." I suppose that's fitting since they're probably the weakest three albums. "Set the World on Fire," with its more commercial sound, was a great waste of the talents of both Waters and drummer Mike Mangini, in my opinion, and the other two were OK, but not really up to par with the rest of the Annihilator catalog.

The disc also contains seven official videos for "Alison Hell," "Stonewall," "Set the World on Fire," "King of the Kill," "21," "Only Be Lonely" and "Syn.Kill 1." I would have liked to see more high-quality live footage, as well. The bootleg stuff is cool, but it really doesn't do the music justice. But I suppose there's only so much space on a disc.

The second disc features interviews with Waters and various other past members of the band, offering an in-depth retrospective from Waters' early years through the Annihilator demos, the official recordings and the future.

Of course, at this point, there are six more years of band history that aren't discussed on this DVD, but it's still a must-have for fans of Annihilator and technical thrash in general.