Review: Bob Wayne, "Till the Wheels Fall Off" 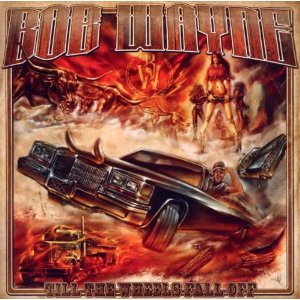 There could be no better way to open Bob Wayne’s upcoming album than with the title track, “Till the Wheels Fall Off.”

If you don’t know anything about Wayne going into this song, you’ll know everything you need to know about him once it’s over. It pretty much sums up how the former guitar tech for Hank III approaches music and life.

The song starts with Wayne making loud train whistle noises. It’s a warning that the album is chugging down the rails at you like a runaway locomotive. The ride begins with this rocking, uptempo country anthem to Wayne’s love of life on the road and his dedication to keeping it going “till the wheels fall off this motherfucker.” It tells you up front what you’re getting with Till the Wheels Fall Off, and Wayne fans would expect no less.

A hardcore do-it-yourselfer who sold his early albums out of the back of his Cadillac limousine, Wayne surprised fans in late 2010 by signing with a label, and not just any label, but Century Media — known primarily for extreme metal offerings. It kind of makes sense, though. Wayne admits to being influenced as much by Sabbath and Pantera as Cash and Coe, and while the music is relentlessly traditional country, there’s certainly a metal spirit in the attitude he approaches it with.

The first product of the partnership, Outlaw Carnie, featured re-recordings of mostly rowdy songs from his self-released albums. This record, Wayne says, is more a reflection of where he’s at now. There are a few re-recordings, but this is largely new material, and it shows the depth that fans of his self-released stuff love.

There are still plenty of rowdy, hell-raising moments, and those are great, but there are also some quieter, more thoughtful songs that show a little more artistry. The world-weary “Get There When I Get There” provides a great example of what Wayne is capable of when he settles into a song. There’s still plenty of defiance in the conflict between his religious upbringing and current state of mind, but it’s a more mature and thought-provoking statement than, say, “Fuck the Law,” which comes next on the record.

We get another great quiet moment later on “Lost Vegas,” where Wayne both laments and celebrates blowing all his money on “rambling and gambling.” It also features one of those philosophical moments that can sometimes surprise given the brash persona of most of his songs.

The great dark storytelling tradition in country comes out on my favorite track, “Lyza.” It tells the story of a tough, experience-hardened woman from New Orleans who is abducted by a truck driver that she hitches a ride with while running from an abusive husband. Let’s just say things don’t end well for the truck driver. She then discovers three other abducted women in the back of the truck who tell her a story of a house full of money and guns that they team up to take down. There’s a little bit of Charlie Daniels’ “Legend of Woolley Swamp” in the verse delivery, and the chorus is an infectious earworm that I just can’t get out of my head. It’s a fantastic country song, no matter how you look at it.

As I said, the rowdy side is still well-represented. “Devil’s Son,” one of the few re-recorded tracks here, finds Wayne trying to make a deal with the devil only to discover that he can’t sell his soul because the devil’s his dad. “All Those One Night Stands” opens like an ode to someone who might have made him give them up, but anyone who knows Wayne should know that’s not where it’s going. After all, this is the guy who wrote “Love Songs Suck.” Instead, it’s a driving party tune that’s about anything but settling down.

Wayne’s old boss Hank III drops by for a duet on another party song, “All My Friends.” It’s a bit more somber than “All Those One Night Stands” as the two reminisce about their errant ways. Some might consider this verging on sacrilege, but there’s almost the feel of a Waylon and Willie duet about this one. Sure, those two legends never sang about their drug trips, but the whole sound and style reminds me so much of some of the things they did.

Other themes you expect from Wayne are also here. There’s the musical nod to Johnny Cash on “Hunger in My Soul,” which also pays tribute to plenty of other artists and songs. And there are a pair of trucker anthems, “There Ain’t No Diesel Trucks in Heaven” and “Spread My Ashes on the Highway,” the latter of which ends the record on the same note that it began – a statement of Wayne’s approach to and philosophy of life.

Wayne’s vocals on Till the Wheels Fall Off are not as exaggerated and wildly over the top as they often were on Outlaw Carnie, and that’s a good thing. Of course, the same could be said for the record as a whole, and again, that’s a good thing. This album will show those who aren’t familiar with his earlier work that there’s more to Bob Wayne than the loud, brash character of his Century Media debut.

And I can’t let this review end without mentioning the artwork, which is one of my favorite album covers in a long, long time. It, too, perfectly sums up what Till the Wheels Fall Off is about.

Like all great country records should be, Till the Wheels Fall Off is a collection of songs about life. There are good times and bad, levity and darkness, defiance and, in a way, acceptance. While some country music fans might not like or agree with everything that Wayne says in his songs, no one can deny that it’s genuine, and that’s something that’s sadly becoming rarer by the minute in country music.

Posted by Fred Phillips at 7:04 PM