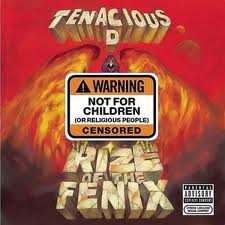 With album art that gives new meaning to the term “cock rock,” Tenacious D rises again from the ashes. With Rize of the Fenix, they’re destined to rule the rock world like the cocks of the walk. They release their inhibitions and rock out with their … OK, enough bad jokes about the cover.

It is, however, a near-perfect summation of what the team of Jack Black and Kyle Gass are all about. Crude? Yep. Juvenile? You bet. Hilarious? Most definitely. There’s also a devious intelligence in their lampooning of the rock-star attitude as they pay homage to some of the very people that they’re poking fun at and deliver songs that worm their way into your brain — despite your best efforts to keep them out.

I remember seeing the episode of their HBO show many, many years ago that featured the song “Karate.” It’s a silly little song, but I sang it obsessively in my head for weeks afterward. To this day, I find it running through my mind when I get hacked off at someone for a stupid reason. A lot of the songs here are like that, too.

The record is filled with tips of the hat to some of their favorite bands. Take the record’s final cut, “39,” for example, and see how many nods to other artists you hear. Neil Diamond, of course, is obvious. Black has always had a little bit of fanboy obsession for him, and he plays it up early in the track. But as it goes on, you’ll hear a little bit of Bob Seger, some Jimmy Buffett, maybe a hint of Joe Walsh. The song is absurd and filthy, and you know you should feel guilty about listening, laughing and – GASP – maybe even singing along. But you don’t. And that’s the beauty of Tenacious D for me. It’s the kind of humor that I’d normally dismiss off-hand, but somehow it just works so well for them that I can’t help but enjoy it.

The idea here is that years after the flop of The Pick of Destiny, Black and Gass have gotten back together, found new energy and launched a comeback effort. That’s where the record starts with the manic title track, which begins acoustic and morphs into a crazy Tommy-like rock opera piece. They return to the story on “The Ballad of Hollywood Jack and the Rage Kage,” which follows the tale of a dejected and angry Gass who is left behind as Black rises to Hollywood stardom and how the two ultimately reunite. It comes to its finale on “To Be the Best,” which is ripped straight from a mid-1980s soundtrack — maybe a “Rocky” sequel, or a wannabe “Rocky” sequel — with its heavy pop synthesizer and trite inspirational lyrics.

They appeal to my geek nature with “Deth Starr,” which is classic Tenacious D, blending a little Who mixed with some bashing metal. Dave Grohl, who has kind of become the unofficial third member of the band and handles all the drum duties on the record, pounds away on the skins on this one in particular. “Senorita” finds Black delivering a pretty passable Anthony Kiedis-style vocal melody over a Spanish-flavored number. “Rock is Dead” blazes away with an old-fashioned pure rock ‘n’ roll sound.

There’s plenty of self-deprecating humor with songs like the infectious “Low Hangin’ Fruit” and “They Fucked Our Asses,” which doesn’t last nearly long enough once the Iron Maiden influence kicks in for a few seconds at the end.

One of the things I’ve always loved about Tenacious D is that, while it’s the musical equivalent of slapstick comedy, Black can actually sing, and KG does have some chops on the acoustic. Though Black takes it goofily over-the-top, as he does nearly everything, he can deliver the silliest of lines with hilarious power, drama and faux seriousness.

There are a couple of songs on Rize of the Fenix that even approach being serious. “Roadie” is actually a pretty good tribute to the guys that make everything work, and about as heartfelt as the D gets. It will certainly put Black fans in mind of his character Eddie Riggs from the video game “Brutal Legend.”

“Throw Down” rocks with a country-blues shuffle and has sort of a Jack White flavor in places, which I can’t believe is a coincidence.

Rize of the Fenix ends up being pretty much a modern, bigger budget version of the late-night HBO show where many of us first discovered the talents of Tenacious D. Black, of course, is far from the unknown goofball he was back then — he’s now a very well-known and well-paid goofball — and even Gass has a somewhat higher profile. The music here has a full complement of instruments, right down to flutes and trombones, and is a far cry from the two acoustic guitars they started with, but the attitude recaptures those days and you’re sure to have a thought or two about two guys playing to a bored open mic-night crowd.

The record is ludicrous and over the top. It’s also hilarious and addictively catchy. It’s everything you want from Tenacious D. Even better than releasing a new record, the D will be touring in support of this album this summer, and I sincerely hope I get a chance to catch them live. You might say I’m cocked and ready … sorry.