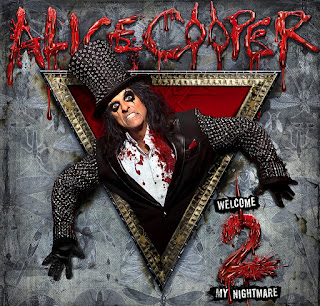 As I look back over 2011′s releases, I realize that maybe it wasn’t quite as good a year in the metal world as I thought. For the past few years, I’ve had as many as a couple dozen candidates for this list, and it’s been difficult to winnow them down to 10. This year, the records that were good were really good, but after that things start to drop off pretty quickly.

10. Three Thirteen, Full Tilt: I love surprises from independent artists, and Three Thirteen delivered a great little retro hard rock package this year. I was drawn in by the physical product, which had a little more thought put into it than the average CD these days, and the fun, hell-raising rock songs on the record held me. The record is a tip of the hat to the classic acts the band grew up on, with a heavy late-1970s, early-1980s rock feel. There are no sappy ballads or thinking-man’s songs here. It’s a party from start to finish. It’s the perfect record for popping the t-tops out of your Trans-Am and heading out on the highway.


9. Amon Amarth, Surtur Rising: There’s probably no band that more symbolizes the metal ethos than Amon Amarth. Bludgeoning riffs, pounding drums and rage-filled growls about Viking heroes and villains somehow always manage to come together into a catchy, melodic tune that recalls the classic days of traditional metal while wielding the fury of the more extreme end of the genre. Though not quite on par with their last two outings, 2006’s With Oden on Our Side and 2008’s Twilight of the Thunder God, it’s still a solid addition to the catalog. Don’t expect innovation or experimentation. It’s an Amon Amarth record, and that should be enough.


8. Bob Wayne, Outlaw Carnie: This is the only non-hard rock/metal-related album to make my list this year, though I admit that there are some promising underground country records — Hellbound Glory’s Damaged Goods, for example — that I haven’t gotten around to picking up yet. I wasn’t sure whether to include this or not, since country outsider Wayne’s debut on Century Media (primarily a metal label) consists mostly of tunes culled from his independent releases, but it’s worthy of note. The record focuses mostly on Wayne ’s rowdier side with high-energy numbers like “Road Bound” and “Driven by Demons,” and the black humor of “Work of the Devil” and “Love Songs Suck.” But there’s also a hint at his other side as he pays tribute to Johnny Cash in sound on “Reptile” and lyrics on “Ghost Town,” and shows a heartfelt side on “Estacata.” The must-hear of the record, though, is “Blood to Dust,” Wayne’s dark answer to David Allan Coe’s “If That Ain’t Country.” Though Outlaw Carnie features enough braggadocio to shame the most brazen rapper, Wayne also shows he’s capable of baring his soul and sharing his own shortcomings.


7. Headcat, Walk the Walk ... Talk the Talk: The unholy alliance between Motorhead’s Lemmy Kilmister and the Stray Cats’ Slim Jim Phantom produces some surprisingly good rockabilly/old-fashioned rock ‘n’ roll sounds. The band delivers a collection of covers from the likes of Chuck Berry, The Beatles, Elvis, Jerry Lee Lewis and Webb Pierce and Mel Tillis, among others. Standout tracks are Lewis’ “It’ll Be Me,” Johnny Kidd and the Pirates’ “Shakin’ All Over,” and, of course, Eddie Cochran’s “Something Else.” There are also a couple of originals in the late 1950s-flavored “American Beat” and the slow blues number “The Eagle Flies on Friday” that, perhaps, hint at more new music to come.


6. Sebastian Bach, Kicking and Screaming: For those of us who remember Skid Row for more than those two unfortunate hits – “18 and Life” and “I Remember You” – this is likely as close as we’ll get to another Slave to the Grind or Subhuman Race. It’s not perfect. Bach overindulges from time to time, weakening some of the tougher songs, and he could still stand some help creating hooks, but young guitarist Nick Sterling is incredible, and the verse of a song like “One Good Reason” would feel right at home on those records. It’s the dark, grungy “Tunnelvision,” though, that is Kicking and Screaming’s top track, with Bach’s best performance.


5. Alestorm, Back Through Time: These Scottish pirates certainly won’t be everyone’s jug of rum, but three full-length albums into the schtick, it’s still just as much fun. The addition of drummer Peter Alcorn gives some serious metal backbone to the insidiously catchy pirate movie melodies. There’s some heavier, thrashy work like “Shipwrecked,” to go along with the lighter, sillier fare, one of the best of which is a cover of a song called “You Are a Pirate” that comes from an Icelandic kids’ show called “Lazy Town.” Sure, it’s goofy stuff, but I dare you to listen to it and not be in a good mood at the end.


4. Symphony X, Iconoclast: American power metal often takes a back seat to its European cousin, but occasionally us Yanks win one. That’s the case with New Jersey power/prog act Symphony X’s eighth studio album, their first since 2007 and possibly one of their best. It shows the band continuing a trend toward darker, more aggressive songs, like the bashing “Heretic,” but there’s still plenty of the melodic and intricate passages fans expect. My personal favorites are the thrash-meets-Dio “Bastards of the Machine” and the grooving “Children of a Faceless God.”


3. Amorphis, The Beginning of Times: It’s been a long trip from their death metal roots to the soaring symphonics of Amorphis’ current incarnation. After a lull in the middle of their career, the Finns have returned with a vengeance, producing possibly their best effort with 2009’s Skyforger. The Beginning of Times isn’t quite as impressive as that effort, but is still quite pleasing. It offers poppy hooks in “You I Need,” mystic melodies in “Mermaid” and a nod to their roots on the aggressive “My Enemy,” among other highlights. It lacks the instant gratification of Skyforger, but delivers a work that’s haunting, mystical and beautiful in its variety.


2. Anthrax, Worship Music: As a fan of the more grown-up John Bush version of the band, I wanted to hate this record. I wanted to be able to say that reuniting with 1980s singer Joey Belladonna was the worst move the band ever made. So, I’m both disappointed and extremely pleased to say that this album holds its own with their best work. It maintains the maturity of the Bush records, Belladonna’s voice is more seasoned, and it shows a little bit of musical growth and maturation. I miss Bush still on songs like “The Devil You Know,” but Belladonna’s Chris Cornell-like wailing on standout track “Crawl” gives me a new respect for him.


1. Alice Cooper, Welcome 2 My Nightmare: I was very skeptical of this record. Sequels tend to be desperate attempts to recall bygone glory days of a musician’s faltering career. It was a surprising move considering that his last few outings have, for the most part, been solid records. This album proves to be a rare exception to the sequel rule. It sounds like the godfather of shock rock is having more fun here than he’s had in a long time, bouncing frenetically around genres from the expected hard rock and garage rock to country, dance, surf rock and even a rap/disco tune. He also gets help from some surprise guests, including Vince Gill, who shreds away on “Runaway Train,” and pop singer Ke$ha who provides the voice of Cooper’s female devil on “What Baby Wants.” It’s one sequel that lives up to its name.

Posted by Fred Phillips at 2:07 PM