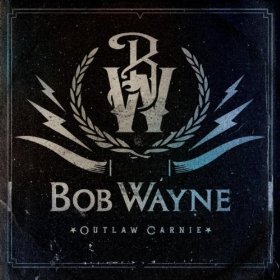 I understand that there are people on both sides of this one scratching their heads a little. The metal crowd is probably wondering why Century Media signed a country artist. The country crowd is probably wondering why Bob Wayne signed with a metal label. To me, though, it makes perfect sense.
The first thing that the metal crowd should know about Bob Wayne is that his music isn’t the overproduced pop bullshit that you hear on country radio. It’s honest. It’s real, and it’s got a lot in common with metal, in spirit if not in sound. Like the best metal being made today, the best country (and not much, if any, of it is on a Nasvhille label) is about making the music you want to make and to hell with trends and marketing. also has personal connections to metal, citing Black Sabbath, Pantera and Neurosis among some of his favorite acts. His music, on the other hand, has more to do with David Allan Coe, Waylon Jennings and Johnny Cash, all guys with the spirit of metal in their own right.
Much of what is on ’s Century Media debut, “Outlaw Carnie,” will be familiar to people who have followed his music over the years and are familiar with the three self-produced records that he sold out of his car at shows. The production values here are a bit higher, and for the most part, the re-recorded tunes are clearer and sound better than the originals. There’s a mix of the rowdy, raucous, humorous songs and more serious and heartfelt pieces, though the rowdier side is certainly at the forefront here. That’s fine by me.
Opening track “Road Bound” sets the tone for the wilder side of the record with undeniable hooks and lyrics that are an open challenge to all comers. For the most part, the more raucous numbers are fun and flamboyant, though there are a few misses. “Everything’s Legal in Alabama” comes off as a bit silly, and the vocals on “Driven By Demons” are a little cornpone at times. “Mack,” which tells the story of a trucker down on his luck who becomes an unlikely hero, offers perhaps the only flourish of metal on the record with some snarled echoing vocals on the chorus. It’s also one of the better tunes here with an addictive guitar lick after the chorus that gets stuck in your head.
The second track, “Estacata,” shows a whole different side of . It’s a heartfelt piece where he shows unusual restraint both musically and vocally. You’ll find a few of those moments scattered throughout "Outlaw Carnie." Most notable is the centerpiece of the record, a song that fans of are very familiar with, “Blood to Dust.” It’s essentially ’s answer to David Allan Coe’s “If That Ain’t Country,” only quite a bit darker. offers up the story of his life in a spoken word style over a mournful acoustic guitar, punctuated by a thoughful, almost philosophical, chorus. The song is also an example of the honesty in ’s lyrics. Though some of the lyrics on the record often verge on braggadocio, he’s also capable of baring his soul and singing freely about his own shortcomings, like his struggle with drugs (he’s clean and sober now) and his penchant for womanizing, which he doesn’t seem to have any struggle with.
There’s a lot of black humor throughout the record as well, perhaps the best example being “Work of the Devil,” which tells the story of a man who walks in on his wife in bed with another man and the resulting ugliness. “Love Songs Suck,” which also references “Work of the Devil,” delivers the punch line over a sincere old school steel guitar lick that seems perfectly suited for a love song.
A reverence for Johnny Cash also gets expressed in a couple of numbers on Outlaw Carnie. “Reptile” is a clear tribute to the Man in Black as it finds singing in a deeper voice over a trademark Cash rhythm and even throws in some Spanish-style horn flourishes that give it a Western sound. An even more obvious homage to Cash comes in “Ghost Town,” but I won’t go into that song too much, as it might spoil the first listen for those who haven’t heard it.
The record isn’t without its weaknesses, like the aforementioned “Everything’s Legal in ” or the womanizer’s laundry list “Chatterbox,” but hits home more often than not, even when he takes a humorous approach. And for all of the darkness and black humor through the course of the record, it ends on an upbeat positive note with the last verse of “2012,” which expresses a vision of hope for the year said by the Mayan calendar to be the end of the world.
For fans who have followed for years, "Outlaw Carnie" covers a lot of familiar ground, but the reworkings and a few new tunes make it well worth the investment. For those unfamiliar with ’s work, it makes a great introduction.