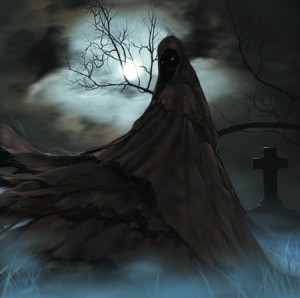 I vaguely recall being asked to review a DarkBlack’s The Barbarian’s Hammer EP for the old Digital Metal and being quite unimpressed. While I don’t, to be honest, remember much about that record, I’m a little more intrigued by the material on Midnight Wraith. I’m not quite won over by it, but it certainly shows some promise.

The five tracks on this EP blend late 1970s and early 1980s traditional metal sounds with ‘70s hard rock for a cool vintage feel. The record opens with “Doom Herald,” a traditional metal number with some early Iron Maiden overtones.
The second track, “Power Monger,” my personal favorite, digs in for a down and dirty hard rock feel. “Golden Idol” opens with a little Thin Lizzy worship before breaking out into more of a galloping trad metal tune on the verse. They revisit the Thin Lizzy-style guitar work on album closer “Broken Oath,” which is the least interesting song here.

The title track will probably hold the most interest for metal fans. It’s a bashing number that’s probably more metal than anything else on the EP, but it still has a bit of a hard rock sensibility, particularly in Tim Smith’s vocal delivery.

The mix on Midnight Wraith is still a little thin, which, as I recall, was one of the issues I had with The Barbarian’s Hammer. Maybe it’s intentional, as it sounds like something out of the era that the band obviously worships. While I appreciate the sound of those 1970s and 1980s records, in most cases, I prefer using the technology we have now to make music sound as good as it can.

Smith’s vocals are also a little on the reedy side for my personal tastes, but that might also owe to the mix where they’re often buried. He does show flashes of a stronger vocal presence, particularly on “Power Monger.” I will say that he’s one heck of a bass player, though.

I’m not exactly ready to profess my fandom for DarkBlack, but Midnight Wraith certainly improves on my previous experience with the band, and there’s enough promise on this EP to make me stay tuned for what they do next.

A review copy of this record was provided by the label.
Posted by Fred Phillips at 11:07 AM