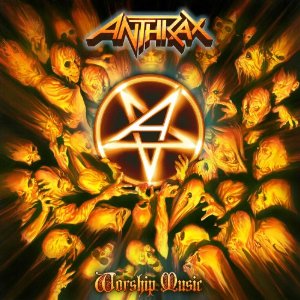 I didn’t have high hopes for this record. First, there was all the drama surrounding it. They bring in new singer Dan Nelson. The album’s recorded and ready to go when Nelson is canned, so it’s shelved. Then, much to my pleasure, John Bush is performing with the band again. But, wait a minute, he doesn’t want to re-record Worship Music because he feels like he doesn’t have any stake in the songs. Then, Anthrax shows up to play the first Big Four show, and who’s on stage with them but 1980s singer Joey Belladonna. He’s happy to re-record the album, and so Anthrax and Belladonna are reunited … again.

That was my second problem with it. I’m firmly in the John Bush camp of Anthrax fans. I grew up with the Belladonna version of the band, and I still love many of those records, but I usually explain it like this: The Belladonna version of Anthrax was a great band for my youth. It was fast, brash and just a little bit goofy. The Bush version was Anthrax for my adulthood. A little slower, a little darker, a little more serious and a little heavier. And I just think Bush is a far better singer. For me, We’ve Come For You All rivals Among the Living, and I was afraid that the return of Belladonna would mark a return to the more cartoonish Anthrax of the past.

Happily, I was wrong, and I’m man enough to admit it. Worship Music is a fantastic record, easily ranking among their best work.

The first clue I had was when the band relased “Fight ‘Em ‘Til You Can’t.” It was a bashing, fast, heavy song that’s about the closest thing you’ll find here to their 1980s work. As much as I didn’t want to like the song, I couldn’t help myself. I ended up listening to it over and over and banging my head along every time.

Fans expecting a return to the sound of the 1980s, though, shouldn’t. Worship Music is not an attempt to recreate Among the Living, though in quality they may have come close. The music here, for the most part, sounds like the modern era of Anthrax – or as modern as you can get from a band that hasn’t released a new record in eight years. There are a lot of similarities between this record and We’ve Come for You All beyond just the cover.

After a fade-in called “Worship,” the record blasts into “Earth on Hell,” a slamming thrasher that features Charlie Benante bashing his drums with a vengeance. Then there’s one of those great groove-laden choruses that mark the Bush era of the band. It’s the first of several times, I admit, that I do indeed still miss Bush no matter how good this record is. “The Devil You Know” opens with a riff that reminds me of a 1970s AC/DC song, only somewhat heavier. It’s actually more of a hard rocker than a thrash tune, but it’s got plenty of memorable hooks and is one of the better songs on the record. The same can be said of “The Constant,” which has a great riff and is another song that’s crying for Bush vocals.

In all fairness, though, I have to give Joey Belladonna props when his voice makes things work, and that’s the case on “In the End,” another personal favorite of mine. It opens with church bells and a great slinky guitar riff. Some dramatic flourishes are laid over it that makes you think they’re about to go a little over the top, but they don’t. It drops back out to that monster guitar riff, and the chorus vocals are a strange mix of arena rock, prog and modern metal. Without Belladonna’s delivery, I don’t think it would work.

The same could be said of “Crawl,” one of the most interesting tracks on the record. It starts out in a slow, alternative mode that reminds me a little of maybe a lighter Soundgarden number. If his name wasn’t on the record, I wouldn’t be able to tell you the singer was Belladonna. It sounds nothing like him, a deeper, more serious voice. From there, the song moves into a more commercial hard rock sound, and it has a great chorus. It shouldn’t work, but I really like it

Not everything is great. “I’m Alive” opens with some clean sweep chords and builds nice and slowly with a good marching riff, but it’s spoiled by kind of a boring verse and a poppy chorus. Outside of the guitar work, it’s one of the weaker songs on the record. Likewise, “Judas Priest,” one of the songs I was looking forward to just because of the name, is an up-and-down affair. There are some really good moments, but it seems to kind of get a little lost.

There are a few blasts of the band’s 1980s sound. “The Giant” is one of those few thrashers with a throwback to their old sound, but it features another one of those arena rock influenced choruses. “Revolution Screams” ends the album with a blast to the head. It’s probably the heaviest song on Worship Music, and one of the best. There’s thrash, there’s groove, there’s shred, there’s straight-up hard rock. The only negative is the hidden track at the end of it after several minutes of silence, which is kind of lame in this day and age.

There’s an interesting dynamic to Worship Music in that it’s a very angry record, but at the same time there are some very accessible melodies that border on commercial appeal interspersed throughout. This, it seems, is truly the third incarnation of Anthrax. There are elements of Belladonna’s first tenure, there are even more elements of the Bush years, and there are some new touches that draw on more recent musical influences. When it all comes together, though, it works. Worship Music manages what I thought might no longer be possible. It once again makes Anthrax and vibrant and viable metal act.