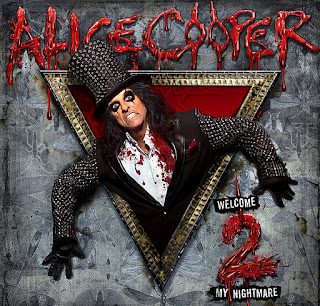 Alice Cooper promised a sequel, and he delivered in a surprising way. The shock rock pioneer went into the studio with the intention to record a follow-up to 2008’s creepy serial killer concept album Along Came a Spider. Once he got in the studio with long-time producer and collaborator Bob Ezrin, they decided to delve farther back into his catalog to the record that is, arguably, his finest moment, Welcome to My Nightmare.

I admit the move left me puzzled. It’s a tried and true recipe for failure. Usually a failing band slaps the title of its most popular work on its latest album and puts a “2″ behind it to draw some interest from fans who have wandered away. It’s never a good idea because it creates a certain expectation that the new record can never match. In fact, most of them suck.

Of course, there are a few differences between most bands and Alice Cooper.
First and foremost, Alice Cooper has never really faltered. Sure, he’s had a few off records, but for the most part, he’s never completely disappointed. That doesn’t change here. Secondly, he’s Alice fucking Cooper. He can do whatever the hell he wants … and make it work. Or, in the case of Welcome 2 My Nightmare, turn it into a moment of mad genius.

You often hear bands describe their latest effort as “(insert most popular record here) updated for the 21st century,” or something to that effect. In the case of Welcome 2 My Nightmare, that statement is actually pretty accurate. It’s been more than 35 years since the original Welcome to My Nightmare hit the scene, and this record is truly like a modern version of that one. The music here is all over the map. There are dark, classical-tinged Halloween-style numbers, there are all-out garage rockers, there are poppy ballads, there’s a Vaudeville piece, a surf-rock song, there are even a couple of country songs and a rap song – all, of course, with Alice’s signature sense of black humor stamped across them. It’s what every good Alice Cooper record should be – a three-ring circus with Alice as the evil, yet likeable ringmaster.

For an album promised to be a worse nightmare than the original, things start strangely. After a horror movie-worthy piano piece, opener “I Am Made of You” is actually kind of a heartfelt ballad with some poppy vocal effects here and there. It’s like the sweet part of the dream before things go horribly wrong. Things start to go a little darker with the high-energy rocker “Caffeine,” one of the more memorable tracks, as our main character fights sleep, and it overcomes him on track 3, “The Nightmare Returns.” A wicked nursery rhyme melody gives way to a darker classical piano and some Savatage or Trans-Siberian Orchestra-like flourishes. It’s brief but powerful.

Gill makes his first appearance on the fourth track, “A Runaway Train,” another of the album’s best moments. It’s a driving country-tinged trip on the rails to hell, and the country star gives a chicken-pickin’ shred lesson on the guitar solos. He appears again toward the end of the record on “I Gotta Get Outta Here,” a great track that blends country with some Tom Petty-like sounds. It makes call backs to all of the previous songs on the record and gives Gill a chance for a more soulful, sincere solo – well, as sincere as anything on this manic masterpiece gets.

Some of the brightest moments come on the offbeat numbers. The Vaudevillian thumper “Last Man on Earth” is absolutely one of the best songs on the record despite having no real rock elements at all. You can almost visualize Alice in his top hat and ragged tails addressing a crowd of rubes from the back of a wagon as he delivers the tune.

Other forays into stranger musical stylings have mixed results. “Disco Bloodbath Boogie Fever” shouldn’t work at all. It is, as the title suggest, a disco tune that features Alice rapping. It ends up being a lot of fun though, in a Weird Al‘s evil twin sort of way. The surf rocker “Ghouls Gone Wild” is the album’s weak spot, getting kind of annoying after a few listens, though I admit it could just be my dislike of surf rock. Somewhere in between is the synth-pop “What Baby Wants,” featuring Ke$ha. I disliked it the first few times through, but it’s grown on me. If not for the slasher movie imagery in the lyrics, it wouldn’t be out of place on some cheesy 1980s soundtrack. It’s not even close to being one of the better tracks, but I like it more every time I hear it.

Of course, there is more typical Alice Cooper fare to be found here. The lead single “I’ll Bite Your Face Off” is an old-school rock ‘n’ roll number with a big, memorable hook that’s a lot of fun. “Something to Remember Me By” is the record’s answer to “Only Women Bleed.” It’s not bad, but not likely to become the classic the song from the first record is. Then there’s the flashy showman number, “The Congregation,” where we’re introduced to the hierarchy of hell. It’s a great song with a mix of darkness and humor.

The only truly disturbing moment on the record is the story of a real-life monster, “When Hell Comes Home.” It’s an alternately heavy and creepy piece that focuses on an abusive father from the viewpoint of his child. It’s particularly chilling when you realize it’s something that happens everyday in the real world.

There is, appropriately, a little history on Welcome 2 My Nightmare. Three of the 13 tracks on the album – “A Runaway Train,” “I’ll Bite Your Face Off” and “When Hell Comes Home” – feature guitarist Michael Bruce, bassist Dennis Dunaway and drummer Neal Smith, members of the original Alice Cooper band. Their appearance is somewhat ironic since Welcome to My Nightmare was considered Alice’s first “solo” record without those former members of his band. Themes from the original album also run through this one, most notably the intro to “Welcome to My Nightmare” echoed in the intro to “The Congregation,” and the instrumental album closer “The Underture,” which blends themes from both records together.

More than anything, what makes Welcome 2 My Nightmare so great, though, is that it’s obvious to the listener that Alice is having a blast on the record – and his long-time fans are all in on the joke. If you’re looking for a full-on heavy rock album along the lines of Brutal Planet or Along Came a Spider, you’ll be disappointed. But fans of Cooper’s classic 1970s work should be thrilled and excited by the return of the twisted ringmaster who commands the ability to take such disparate elements and blend them into a cohesive, rocking unit. Welcome 2 My Nightmare is an amazing record and the rare sequel that’s absolutely worthy of the name on the cover, which just goes to show that no matter how bad most sequels are, every now and then, you get an “Empire Strikes Back.”

Enter to win a signed copy of the CD at Teeth of the Divine.

Posted by Fred Phillips at 7:59 PM