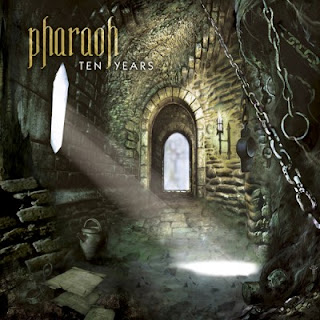 As fans await the follow-up to 2008’s Be Gone, Pharaoh offers them a little teaser with this six-song EP featuring two new tracks, two rare tracks and a couple of covers. It’s not the four-course meal we may have wanted, but it’s a nice little appetizer.

The new tracks are the title track, “Ten Years,” and “When We Fly.” Of the two, I prefer the title track, which is more of a straightforward traditional metal song with a chugging power riff from Matt Johnsen and some great, aggressive vocals from Tim Aymar. “When We Fly” is a great track in its own right, though, leaning more toward the power metal side of the band’s spectrum. It’s a bit more complex than “Ten Years,” with Aymar soaring a little more and an occasional heavier break showcasing Johnsen and drummer Chris Black. Hell, on second thought, I’m not sure I prefer either of the new tracks over the other. They’re both awesome.

Next up is the first of two covers, New Model Army’s “White Light.” This one, obviously, is a little different from the usual Pharaoh fare. It’s a little more subtle, using some synths and allowing Aymar to show a really different side of his voice. Johnsen lays down some smooth leads, and bassist Chris Kerns gets to show off here and there. It’s a bit of a surprise, but a good one.

Next up are the two previously released tunes, both of which are from a single that came with the vinyl release of Be Gone. “Reflection and the Inevitable Future” is the stronger of the two, a heavier number with some sharp riffing from Johnsen. “Nothing I Can Say” gives Kerns another chance to shine early on, but it’s Aymar’s song as he moans, wails and screams his way through the progressive-tinged tune.

Finally, the EP is closed out in ass-kicking fashion with a pretty straight cover of Slayer’s “Tormenter.” Some of Johnsen’s guitar sounds perhaps give the more noodly riffs a bit more of an Iron Maiden feel than the original, and Aymar obviously has a wider range than Tom Araya, which he puts to use, though not too much.

All in all, Ten Years is a tasty little treat that will surely whet fans’ appetites for the band’s next full-length effort.