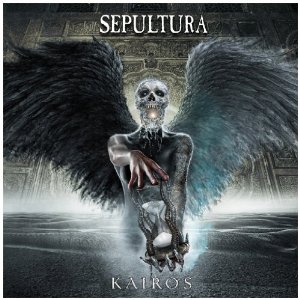 I’ve had the same problem with the last few Sepultura records. They all struck me as pretty good albums straight out of the box, but after a few weeks I put them away, and most of them haven’t gotten any play since that initial listening period.

This is the second record with guitarist Andreas Kisser now, more or less, fully in control of the band’s sound, but if you’re expecting the future direction of the band to be established here, you shouldn’t. Instead, Kairos leads us on a trip back through time to various eras of the band from the chugging thrash of the Arise/Chaos A.D. era to the hardcore influence of the first couple of Derrick Green outings, to the more concepty stuff they’ve done with their last albums. Perhaps it’s an intentional move, given that the theme of this record is something about the passage of time, but you’ll find a song or two that represents almost all of the band’s various incarnations.

That’s not to say that there isn’t some good material to be found here. “Spectrum” starts the record off with a cool, if somewhat repetitive guitar riff, some tribal-influenced work from drummer Jean Dolabella and a spoken growl from Green. It then quickly settles into a plodding number that will certainly remind listeners of the Max Cavalera era of the band. Second track, “Kairos,” continues in that vein, with a very Chaos A.D. feel.

The pace picks up a little with “Relentless,” but the opening will surely conjure thoughts of “Refuse/Resist” in fans’ mind. It has a little more energy and personality than the first two tracks, though, with Green stretching out of the Cavalera bark a little more. “Dialog” gives us another one of those plodding repetitive guitar riffs to start, but becomes every so slightly more adventurous with some slower interludes and spoken word from Green. I’m not sure I like the song overall, but I do think it’s one of Green’s better performances.

“Mask” and “Seethe” dive right back into the early thrash sound, sounding like something straight off Arise. They are among the more entertaining tracks on the record. “Born Strong,” a combination of the earlier and more recent sounds, is a thoroughly enjoyable number, though, probably my favorite on the record. “Embrace the Storm” has a catchy guitar riff – and almost a Machine Head feel on the chorus, but Green’s verse vocals send it into a bit of a lull.

Toward the end, we get a little taste of something different with “Structure Violence (Azzes).” It features the Roots-style tribal percussion blended with some industrial noises and sound bytes. The vocal on the chorus is very reminiscent of Ministry. I won’t say it’s the best song here, but it’s certainly the most interesting, and the only flash of something a little out of the ordinary that we get.

There’s also a strange cover here in Ministry’s “Just One Fix.” It’s essentially a note-for-note remake of the original without much of the band’s own personality injected. Of course, the argument could be made from listening to Kairos that this is a band that doesn’t know exactly what its personality is. Instead of forging ahead with something different, Sepultura, at least on this record, seems to be content with repeating sounds from its past. Kairos is, at times, entertaining, but the overall feel is a little flat, and there’s not an energy here that excites me. Like those last few records, I doubt it will have much staying power. More likely, it will soon have me reaching for Arise or Chaos A.D.

Posted by Fred Phillips at 4:25 PM