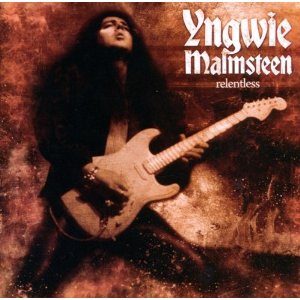 Malmsteen also steps up to the microphone again on “Look at You Now,” which, just as it was when he tried vocals on Perpetual Flame, is a real mistake. For all his talent as a guitarist, he has no ability as a singer. This performance is better than the one on the last record, but it’s still a head-shaker considering that he has Owens at his disposal and it seems to be a tailor-made song for his voice.

The rest of the record, as is often the case with Malmsteen, consists of him showing off his fleet fingers on the scalloped fretboard of his Fender Strat. As always, the neo-classical licks and runs that he delivers are always impressive and often mind-boggling, but at least for me, there’s only so much of that I can take. Once the wow factor wears off after a couple of listens, I find myself skipping most of the instrumentals and going back to the tunes that feature Owens. “Into Valhalla” is probably the most memorable with some more chanting and a chugging bass riff, also played by Malmsteen. There’s even a nice homage to Ozzy Osbourne’s “Diary of a Madman” slipped in. Whether it’s intentional or not, I don’t know, but I sort of doubt it.

The six songs that feature Owens on vocals are some of the best work that Malmsteen has recorded in a very long time. They’re all complete, well-constructed songs, rather than simply vehicles for Malmsteen to show off his shredding skills. Unlike on Perpetual Flame, Owens seems inspired and energetic on these tracks, and “Critical Mass” and “Enemy Within,” in particular, deliver exactly what I’d hoped for from this pairing. I only wish there had been more moments on the record like this. The rest, for the most part, is self-indulgent wankery. Of course, what else do you expect from Yngwie?

Relentless is the first Malmsteen record in quite a while that I expect I’ll return to regularly as time goes by.

This record was purchased by the reviewer.