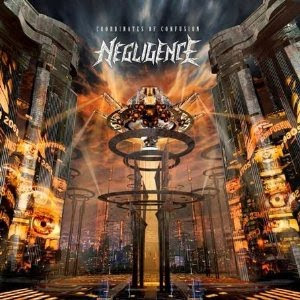 Normally when I go into a review listen on a band that’s new to me, I’m looking for something that I haven’t heard before. Sometimes, though, something very familiar that’s done very well can make an impact. That’s the case with the Slovenian thrashers Negligence.


Coordinates of Confusion will catch the attention of thrash fans from the galloping opening riff of “Mind Decay.” Like most of the riffing on the record it’s fast, concise and tight, the hallmarks of the genre’s best acts. One of the things that sets them apart a little in my mind are the vocals of Alex Skofljanec. Beginning with the chorus of this opening track, he delivers a more melodic vocal style at times, reminiscent of Iced Earth’s Matt Barlow in his better moments. Thrash vocalists that can actually sing are rare, and often annoying, but Skofljanec walks the line well, and it really works, particularly on tracks like “Disharmony,” where he stretches it out a little more.

While most of the record is straight up thrash, they do throw in a few tempo changes. The soft interlude “The Way To …” is reminiscent of one of Testament’s short instrumental pieces, and there’s a bit of a melodic stretch on the chorus of “Addicted to Aggression.” Mid-tempo pieces like “Sickened” reinforce the Barlow vocal comparison and possibly tread a little too close to the Iced Earth sound, but they’re still good pieces. I prefer, though, the all out gallop and bashing of a tune like “Shark Attack.” Sure, we’ve heard it before, but it’s still a lot of fun.

There are some flourishes throughout the record, on songs like the title track, with an almost proggish bent that seem to imply a much greater promise under the surface of the band’s fairly typical take on thrash, and I’d like to see them explore that a little more. Hopefully they will on future efforts. It would be interesting to see where they could go with it.

Coordinates of Confusion won’t blow anyone away, but it showcases a young band with great energy and chemistry and a huge upside. If they choose to get a little more adventurous on future efforts, they could make a big impact on the current thrash scene.