Review: White Wizzard, "Over the Top" 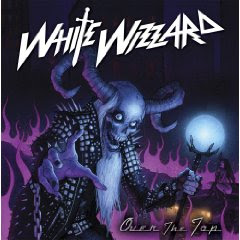 When I wrote my review of White Wizzard’s High Speed GTO last year, I said that if they could deliver an album as good as the title track of that EP, I’d proudly wear the T-shirt, despite my inner editor’s strong objections to their spelling of the word wizard. Well, folks, my shirt is on the way because their full-length debut Over the Top may well be the best traditional metal record you’ll hear this year, or any year in recent memory.

When I became a metal fan back in the early 1980s, metal was metal, pure and simple. No one was stringing together words to engineer their own little niche subgenre like blackened melodic power disco thrash. No fans of one little corner of the metal world were looking down their noses at fans of another little corner. Heck, I didn’t even know what a NWOBHM was for years after the fact. Metal was simply metal, and quite frankly, I recall those days fondly every time I see fans of different subgenres sniping at each other.

That’s one of the things that make this record great. It brings back those days in their full, vivid glory. The songs here are pure, simple metal in its most basic form. No posturing and no bullshit. There’s no bemoaning the evils of mankind or the oppression of religion, no black clouds of depression, no bleak landscapes or snarling hounds of hell, no summoning the demons of the fiery depths to do your bidding (well, OK, maybe a couple, but they’re fun demons). Instead, there are a lot of songs about fast cars, women and, of course, metal. And, in the end, isn’t that what rock ‘n’ roll was really about before the hippies got a hold on it and turned it into a cause?

White Wizzard comes barreling out of the gate with the title track, a fast-paced, upbeat number with an undeniably positive message that your dreams can come true if you have the will and desire. Like most of the album, it’s quite refreshing from a genre that (in many cases, rightly) has come to dwell more on shattered dreams. Then it’s time to hit the highway with one of my favorite numbers, the appropriately driving “40 Deuces.” It gallops along at high speed with a soaring, memorable chorus melody. It’s the kind of song that makes you want to head out in the country, roll down the windows and just crank it up as you fly along the roads. As silly as it may seem to some, when singer Wyatt ”Screaming Demon” Anderson belts out the line “I’m shifting gears to ride the sky/My metal heart will never die,” I’m yelling it right along with him, horns in the air — and I mean it. It’s a song about energy, power and freedom at its most raw.

One of my favorite melodies on the record comes on the swinging “High Roller,” with shades of Paul Di’Anno-era Iron Maiden blended with some of the more commercial bands of the ’80s. It’s an infectious number that’s damned near impossible to get out of your head. Soaring, powerful rockers like “Live Free or Die” and “Out of Control” deliver incredible energy. “Strike of the Viper” offers up an aggressive guitar riff with yet another memorable fist-pumping chorus, a hallmark of most of the tunes here.

Then, there’s perhaps my favorite song on the record, “Iron Goddess of Vengeance.” It’s a huge, epic song in the spirit of classic Iron Maiden with a main melody that reminds me a bit of the Scorpions’ “Sails of Charon.” It’s a hulking slab of a song with unforgettable hooks and melodies. It’s, quite simply, everything that a metal song should be.

The record ends with two covers, Cloven Hoof’s “Gates of Gehenna” and Judas Priest’s “Heading Out to the Highway.” Both are spot-on, by the book covers, and despite being good, end up being the weak points on the record, outshined by the band’s originals.

Guitarist Erik Kluiber and Chad Bryan, who were not part of the band during the recording of High Speed GTO serve up some tasty old school riffing and twin guitar harmonies. The backbone of the band, though, remains founder and bassist Jon Leon. In an age where the bass is often lost in the mix, he attacks the instrument with a vengeance, forming the foundation of the music in the way that classic bass players like Geezer Butler and Steve Harris did it.

I also have to admit that I owe Anderson an apology. After making fun of his “Screaming Demon” nickname and his vocals in my review of High Speed GTO, I discovered that he was not actually the singer on that record. (It was a digital download promo, and I was working from info on the band’s Web site rather than actual liner notes.) So I’ll make up for it here by praising his tone and control, as he turns in a top-notch performance, much better than the often pop flavor of the EP.

While White Wizzard draws obvious inspiration and influence from NWOBHM bands, there’s no sense on this record that they’re trying to mimic Maiden and Priest. Instead, the music sounds fresh and energetic, while maintaining a deep reverence for the style. I feel like I’ve used this word too often describing this record, but I can’t come up with a better one – it’s refreshing.

If I sound like I’m waxing a little too poetic about this record, well, maybe I am. But I can’t help it. I love this record. It’s like hitting a restart button on my musical journey. Over the Top has made me remember all the reasons that I loved metal in those early years, and that, my friends, is priceless. Long live the White Wizzard.

Posted by Fred Phillips at 7:47 PM