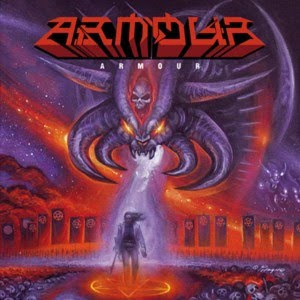 It seems that a lot of the albums I’ve gotten early this year have a heavy 1980s influence to them. Most have been surprisingly very good, a couple have been awful and then there’s the middle ground, where the full-length debut from Finland’s Armour falls.

There’s some fairly solid early-to-mid 1980s hard rock here, falling a little more toward the commercial end of the spectrum. The bands that come to mind when listening to the record are acts like Krokus and Fastway.
The music is pretty solid for the style, but there’s more than a fair share of cheese here, mostly in the vocals and lyrics. Singer Vince Venom has that particular screechy rasp that was popular at the time, but can get very annoying in its upper registers.

The record starts off with the cheese-filled anthem “Rock ‘n’ Roll Tonite.” The song is waaaay over the top, and gives you a pretty good idea of what to expect from the rest of the record. Second track, “The Time is Right,” is surprisingly restrained with a nice main riff from guitarist Mike “H.C.” Slutz (I wish I were kidding). They’re quickly back into overkill mode though with the shouted chorus of “Roll Out (Or Get Rocked.)”

Armour offers up a heavier side as well, influenced by the likes of Accept and WASP. “Satan’s Knight” is the first of these, a high-speed rocker, that’s a little less flamboyant. The other Accept-flavored burner, “Hellfire,” ends up being one of the better songs, despite the fact that it’s a tune we’ve heard over and over from a variety of bands.

When Armour dials it back a little, though, they can be pretty good. “Ready to Attack” features a nice opening riff and never gets too out of control, making it probably my favorite song on the record. Likewise, the WASP-influenced “Can’t Resist Your Spell” is a pleaser for the spiked wristband-wearing metalhead in me, despite some occasionally painful lyrics.

And speaking of painful lyrics, there’s some quality comic relief to be found here at times. “Sex Demon” offers us some of the worst sexual metaphors since Spinal Tap’s “Sex Farm.” “I’ve got a gun loaded with a shot/ girl you’re gonna scream tonight when my bullet hits the spot,” for example.

It’s not that Armour is any worse than many of the bands I listened to in the early and mid-1980s. In fact, they’d fit in quite well, and if I’d heard them back then, I probably would have loved them. The problem is more the fact that I’m not 12 any more, and many of the songs here are either sophomoric or a bit silly in the lyrical department. Unlike, say, White Wizzard, which seems to embrace the cheese factor and have fun with it, Armour, at least to my ears, seems to be very serious about it, which often makes it unintentionally funny.

If you’re looking for a little trip back to your adolescent years, and don’t mind a healthy helping of cheese, you could do much worse than picking up Armour’s full-length debut. Though it won’t likely stick with me long, I have to admit that it’s at least good fun for a short time.