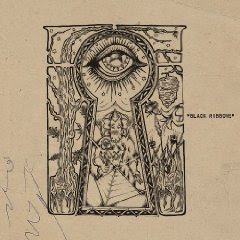 It’s taken me several listens to finally get my head around this latest release from Shooter Jennings, and I’m sure it will take me quite some time yet to reach a final verdict on this unexpected turn.

It doesn’t come as a huge surprise to me that “Black Ribbons” is not a country record. Shooter’s rock ‘n’ roll roots run almost as deep as his country ones. He started his musical career in a rock band, he’s known to break into a jam of Black Sabbath’s “Sweet Leaf” while performing his own “Busted in Baylor County,” and the last time I interviewed him, we spent an enjoyable few minutes discussing the merits of Sabbath’s underrated 1975 album “Sabotage.” Pair that interest with the fact that his last record, “The Wolf,” was a more traditional country album, and it stands to reason that the rock would be out in force on this one. What is surprising, though, is the tangled web of influences that mix and mingle.


“Black Ribbons” is a futuristic concept album. The story involves a DJ named Will o’ the Wisp, played amiably by author Stephen King, who is broadcasting his last show because at midnight the government will take over the airwaves. Along with his messages about freedom and dissatisfaction with what, in the story, has become an oppressive government, Will o’ the Wisp also decides to play music by the fictional band Hierophant, which of course, is where Jennings comes in.

When I say rock, make no mistake, this isn’t the Southern-fried rock that he’s cranked out occasionally on his first three albums. These songs, for the most part, are full-on rockers with some psychedelic leanings and the electronic influence of acts like Nine Inch Nails. Whereas rock was the underlying influence on his earlier work, it switches places with the country for this one. You may hear echoes of those records here, but they’re buried in a wailing wall of electric guitars and synths.

The first single “Wake Up” sets the tone with an electronic, trippy opening that is interrupted with a big, grooving alarm-clock of a guitar riff that could have been pulled from that “Sabotage” album. It delivers the message of the album often: “Don’t let them get you down.” After the song, King delivers the first of several turns as Will o’ the Wisp which are scattered throughout the music, on which he waxes poetic and introduces a few of the songs.

“Triskaidekophobia” (fear of 13, as Will explains) is up next, and it shows the best of what this blending of his country and rock roots could be as one of the better songs on the album. It blends Jennings’ outlaw country sound with a cool alternative rock vibe and a memorable melody. It does still seem a little strange when his voice goes into his dad’s registers over rock guitars, but in a good way. That leads into one of the heavier songs on the record, “Don’t Feed the Animals,” which layers some Jimi Hendrix-style fuzz guitar riffs over a modern rock base, again with lots of electronics.

The influences, as you may have guessed are all over the place, and it makes for some strange bedfellows. On “Everything Else is Illusion,” for example, we get a garage rock riff paired strangely with a Dixieland-style vocal on the verse. Or take “When the Radio Goes Dead,” where a tasty Spanish-flavored acoustic guitar lick gives way to a jaunty Coldplay-flavored verse. Neither is among my favorite tunes, but you can’t say they’re boring either.

There are some nods here and there, too, to Jennings’ country audience. “God Bless Alabama,” which we originally heard as a straight country song in duet with Jamey Johnson on CMT’s “Crossroads,” is perhaps the most like his past work. It gets decorated with some more psychedelic leanings and electronics. I’m not sure they were necessary, as it would have been a solid song without them. Likewise, “All of This Could Have Been Yours” should have more appeal to the country crowd, opening as a piano ballad and offering the haggard feel of past tunes like “The Song is Still Slipping Away” or “It Ain’t Easy.” The title track brings yet another foray back into country, with the most stripped down presentation on the record. I like the approach on an album that often feels too burdened with extras, but unfortunately, it’s not one of the better songs.

The second half of the record hits a little bog, starting with the sophomoric punk rocker “Fuck You (I’m Famous).” It’s a rant that seems a little out of place on an otherwise thoughtful record. Then they hit a funky 1970s influence that starts with “Lights in the Sky” – blending Pink Floyd, Frampton and a bit of “Fly Like an Eagle”-era Steve Miller – and “Summer of Rage,” which opens with more of that shimmery sci-fi keyboard work that was popular for a time in that decade. The latter song does at least have an interesting chorus melody that raises it above the other songs in the block.

We’re back on track again, though, with the Southern rock-flavored groover “California via Tennessee,” another personal favorite here. It’s still a little strange, though, paired against the following song “The Illuminated,” which is a pure bit of Pink Floyd worship. The album comes to what could be an unsettling finale that ends in an instrumental reprise of “All of This Could Have Been Yours.” It brings a somber, yet still somehow hopeful, conclusion to the storyline.

Jennings has surrounded himself with a very capable band, particularly guitarist John “The Gov’ner” Schreffler Jr., who offers some smooth and tasty licks over a variety of rock subgenres, and keyboard player Bobby Emmett, who, it could be argued, provides the most prominent instrument on the record.

As I said at the start, it might be a while before I can really make a final judgment on “Black Ribbons,” but I have to admit that I like it much better than I thought I was going to on first listen. I also have to give Jennings credit for taking a risk. He could easily have popped out another country/Southern rock record to keep fans happy, but instead he opted to take on an ambitious, and at times, bizarre project that will certainly make fans think.

At this point, I’m not sure whether “Black Ribbons” is a vanity piece or if it’s pure genius. Today, I’m leaning toward the latter, but I suspect that it’s a little bit of both. Approach it with an open mind and make your own decision.

Posted by Fred Phillips at 5:06 PM