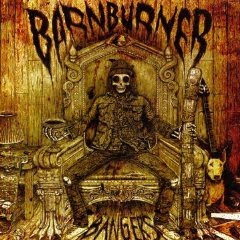 Here’s yet another entry in the parade of retro records that seem to be rolling in early this year, and like most of the others, Barn Burner’s Bangers is a pretty solid outing.

The Canadian outfit certainly draws influence from the early 1980s like the other retro bands I’ve heard recently, but they also dip back into the sludgy sound of 1970s metal and doom and sprinkle the upbeat energy of a garage band in places throughout the record.
There are even a few hardcore and punk twists, at least in the vocal delivery of Kevin Keegan, who sounds oddly like a cross between Monster Magnet’s Dave Wyndorf and Suicidal Tendencies’ Mike Muir with an occasional touch of Henry Rollins. It’s an odd mix, but on this record, it works.

Much of Bangers sounds like the band members put all of their influences in a pot, stirred in a few mind-altering substances, and dished it out to the listener. And I, for one, am lapping it up. The influences are clear, but you never quite know what the next song is going to bring.

As the main guitar riff of album opener “Holy Smokes” kicks in, I’m expecting another round of NWOBHM worship, but later in the song, we get a bit of a doomy feel. “Fast Women” opens with my favorite riff on the record, a humongous, groove-laden Black Sabbath slab, and has a solid hook that makes it my favorite track here. But just as you think you’ve figured out where it’s going, “Long Arm of the Law” hits you with a squawky garage rock lick and some punk influences.

Barn Burner also deliver a couple of winners in the song title category, starting with the plodding stoner anthem “Beer Today, Bong Tomorrow.” Then there’s “Brohemoth,” an attempt at the “epic” song that many 1970s and early ‘80s bands felt they needed. I use the term lightly, as I’m sure the members of the band would. Keegan uses a higher-pitched voice on some of the vocals from the latter song that’s fairly interesting.

Interesting song titles might catch your attention, but they have to be backed up with music. For the most part, they are. “Runnin Reds” raises the punk ante with a Black Flag vibe, while “Medium Rare” blends some NWOBHM riffing with a punk vocal deliver. There’s a more commercial angle on “Half Past Haggard,” which opens with a pop-laced riff before jaunting off into garage territory. “Wizard Island” gives another epic riff with a cool bluesy sort of verse.

There’s an interesting mix of classic influences ranging from Black Sabbath to Iron Maiden to Black Flag, but you can also hear the influence of more current acts like Mastodon and The Sword. The record is loaded with great grooves and flows easily. It seems, finally, that retro bands have gained the knack of showing their influences without sounding copycat, and Barn Burner does that well. While Bangers isn’t my favorite of the throwback records I’ve gotten this year, it certainly earns its place in my collection.

Posted by Fred Phillips at 3:05 PM