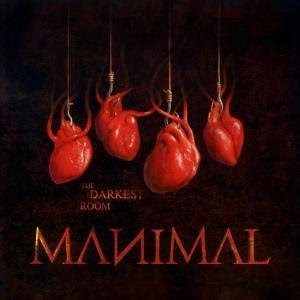 As much as I’d like for every record I hear to bring something new to the table, I know it’s just not possible. And in some genres, innovation just simply isn’t part of the game, so you look at how well the bands use the conventions.

When it comes to European prog/power, Sweden’s Manimal use those genre conventions just about as well as anyone in the field.
Their full-length debut, The Darkest Room, offers a nice mix of European power with a slight touch of prog and some nods to traditional metal. There won’t be anything here that you haven’t heard before, but for those who appreciate the style, it’s an album well worth hearing.

Those looking for the darker underbelly of metal need not apply. There’s a bouncy upbeat feel to most of the songs here, in the European tradition. There is an occasional break from that, as on my personal favorite track, “Spinegrinder,” which opens with a hint of darkness in the riffing and some distorted, almost spoken vocals that give the song kind of a twisted sound. On the chorus, the song is very reminiscent of classic Judas Priest. For me, it’s easily the top performance of a pretty solid set.

“Human Nature” offers a kind of tribal feel at the beginning that sets it apart. The chorus of “Living Dead” is quite memorable, and “The Life We Lived” offers just a little shot of vintage Queensryche. Despite being the most standard power metal number on the record, I also find myself drawn to the opening riff of “Dreamers and Fools.”

The musicianship here is rock solid, and fans of the European school will love the vocals of Samuel Nyman. There’s no doubt the guy can wail with some nice lower register moments mixed in with the insane highs. Some of those highs can get a little annoying at times, though, particularly on “Ordinary Man.”

There’s enough variance and dabbling in genres outside power metal here to make The Darkest Room interesting, and the songs, for the most part, are memorable. It’s not the kind of record that will blow you away, but it’s a rock solid addition to the collection of prog/power fans.

Get "The Darkest Room."

Posted by Fred Phillips at 5:46 PM