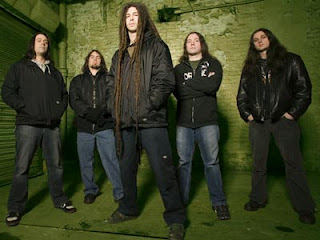 So what do you do as a band, when you've already accomplished all your goals?

That's the question Massachussets thrashers Shadows Fall are currently faced with, but it's not a bad problem to have, said vocalist Brian Fair.

"When we originally got this band together, we just wanted to play some local shows and then maybe get out and tour a little," he said. "At this point, we've already been to Japan, all around Europe and played Castle Donnington with Iron Maiden. After this, it's all gravy."

The show at Castle Donnington in England, one of heavy metal's most hallowed venues, was the pinnacle of the band's young career so far, said Fair, allowing them to open for two metal legends and putting them in front of tens of thousands of fans.

"It was unreal," Fair said. "To be able to play with a band as amazing as Iron Maiden on their classic home turf was just unreal. Then, the next day Metallica showed up and did a surprise set, so within the same weekend, we covered two metal dreams, which was opening for both Iron Maiden and Metallica."

Next up on the heavy metal hit parade, the prince of (bleeping) darkness himself, Ozzy Osbourne, as Shadows Fall is set to rip up the second stage on this summer's Ozzfest tour. Fair said the band has already played with most of the other bands on the second stage, and they're looking forward to seeing old friends like Killswitch Engage, Sworn Enemy and Hotwire. Fair said it's nice to be playing with people you know, but even nicer to be able to bring your music to masses of new people.

"It's cool to be part of something that huge and also to play in front of a lot of people who have never heard of us before," he said. "That's always a fun thing - it's a challenge. If you keep playing to the same kids over and over, you really don't have to try as hard. With this, it's going to be a lot of faces we've never seen, and we just want to go out and try to make as many new fans as possible."

Every year at Ozzfest, there's usually a second-stage band that really breaks out and creates a tremendous buzz among fans. Could it be Shadows Fall this year? Fair hopes so, but he's not going to get cocky.

Whether or not they emerge from Ozzfest the champions of the second stage, a buzz is already building around Shadows Fall. Other musicians constantly cite them as one of the best up-and-coming bands and their videos for "Thoughts Without Words" and "Destroyer of Senses" are mainstays of MTV2's resurrected "Headbanger's Ball" and Much Music's "Uranium." Fair said the renewed interest in metal on television has been a big boost for Shadows Fall and a lot of other bands.

"Even just a few years ago, any band on an independent metal label, if you made a video, the most it was going to end up on was probably a VHS compilation that would get seen by 100 or 200 people," he said. "Now they're actually giving airtime to some of these underground bands, and it's really amazing. We're pretty much a grass roots, word of mouth kind of band, so to have that mass exposure, with that many people we normally wouldn't be able to reach, is a huge help."

But Fair is quick to point out that metal fans can be a finicky bunch and don't buy into a lot of hype. He said the band won't buy into it, either.

"We're trying not to really think about it too much, but to live up to it by playing everywhere we can and as hard as we can every night," he said. "Sometimes the metal kids are looking to knock you off the high horse when you have too much hype going on. We don't want it to be hollow praise. We want it to be because we're out there playing and kicking as much ass as possible."
Posted by Fred Phillips at 11:21 PM