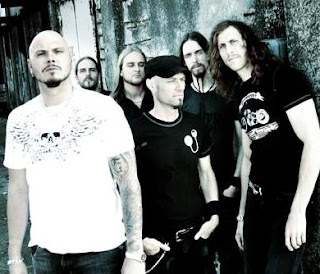 When two bands are constantly compared to each other in the media, why not take the show out on the road and prove to the fans which one is actually the best?

That's just what Swedish acts Soilwork and In Flames decided to do with the In Flames vs. Soilwork tour, which is currently winding its way through the U.S.

The two bands have also fanned the flames of their rivalry with their dueling videos, which debuted on MTV2's "Headbanger's Ball" a few weeks ago. The Soilwork video for "Rejection Role" and the In Flames video for "Trigger" feature members of each band heckling the other as they perform. There are also cutaway scenes which show some street meetings and a water balloon fight between the bands.

"They're pretty funny and different from most metal videos," said Soilwork vocalist Bjorn "Speed" Strid. "We're always getting compared to each other in reviews and so on, so I think it's a pretty cool thing that we're acting like rivals in the videos."

In fact, the bands are friends. The idea for the videos was born when the members of In Flames came to visit Soilwork in the studio. They were both planning videos with the same director, who pitched the idea. Strid said both bands thought it would be fun.

"Metal videos are always supposed to be five angry guys standing in a warehouse with chains hanging all over the place, so we're kind of making fun of the whole thing," he said.

The two bands are also following a similar path with their recent albums and venturing into a new, more melodic brand of metal. So far, Soilwork's "Figure Number Five," has received positive reviews. Strid says the changes aren't intentional, it's just the natural direction the band's writing has taken in recent years.

"The main elements in Soilwork's music are melody, atmosphere and intensity, and I think we've got a perfect balance between those elements on this album," Strid says.

"Figure Number Five" also finds Strid again stretching his vocal abilities from the typical screams that were one of the hallmarks of the "Gothenburg sound" to more melodic, clean vocals.

"I've rehearsed a lot on my vocals, sometimes six hours a day singing to a lot of different kinds of music," Strid said. "Just like the other guys in the band, I want to develop as a musician."

But, as always in the metal world, with a more melodic sound comes a certain number of unhappy fans. Strid thinks most of the fans will come around in the same way they did for the band's last album "Natural Born Chaos," which was panned by metal fans and critics at first, but later ended up on most 2002 year-end "best of" lists.

"We get some angry e-mails about `sellout,' but it's always like that," he said. "I think most of the Soilwork fans are growing with the sound, and I think most of the people who liked `Natural Born Chaos' will like this one as well."

Once the In Flames vs. Soilwork tour is done, the band still has plenty to do. Strid said they'll be heading to Germany, Japan and Australia, before they land back in the states for a second U.S. tour. Strid said it's all about getting their music in front of the fans.