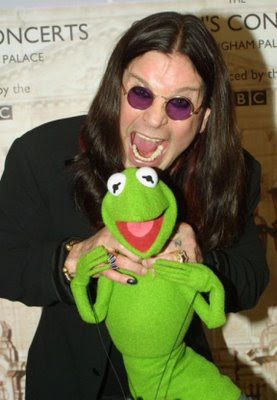 For those who only know Ozzy as the doddering, slightly addled father on MTV's "The Osbournes," it may be hard to figure out why legions of hardcore fans are so dedicated to him, why stadiums erupt in chants of "Ozzy, Ozzy" when he takes the stage or why almost every hard rock outfit worth its salt claims him as an influence.

To understand that, you'd have to go back and look at the life and times of the godfather of metal.

The story began in 1970, when a new band and new sound were about to be unleashed on the world. Black Sabbath's self-titled debut album hit record store shelves. The four young men from Birmingham, England, began as a blues band called Earth, but then hit on a brand of music that distilled their industrial roots into pure musical energy.

Though some might argue that heavy metal began with Led Zeppelin, Steppenwolf, Jimi Hendrix or even the Beatles' "Helter Skelter," when you hear the first three haunting, hollow notes of the song "Black Sabbath" - notes that echo like the tolling of a lone bell over a bleak landscape - you know instantly this is a different beast entirely.

The band was built around the crushing guitar riffs of Tony Iommi. Though not the most technically proficient guitarist, Iommi reigns as undisputed master of the riff. Three decades later, he still owns the copyright on most of the best metal riffs ever written.

Giving the band its personality was a slightly overweight, blond singer named John "Ozzy" Osbourne. His vocals weren't as impressive and versatile as his peer Robert Plant, nor were they as powerful as later metal vocalists like Bruce Dickinson, Rob Halford and Ronnie James Dio, who later replaced him in Sabbath. But they were unique, and his mocking voice fit seamlessly into the band's gloomy sound.

Thus began a 10-year run that would shake the music world to its core, giving rise to bands like Metallica, Slayer and Pantera. The influence of Sabbath even echoes in the percussive rhythms of today's hard rock.

But like all good things, Sabbath eventually came to an end (at least for Ozzy.) In a drug-addled confusion at the end of the 1970s, Ozzy and Sabbath parted ways. At the age of 30, most people wrote Ozzy off as a washed-up has-been. They were wrong.

Enter Sharon Arden, daughter of Ozzy's manager, who worked tirelessly to get him signed to a solo deal before becoming Mrs. Osbourne. A shrewd businesswoman, most people speculate that Sharon is the only reason Ozzy has lived to see 54, and certainly the main reason for the singer's success.

In 1980, Ozzy released his solo debut, "Blizzard of Ozz," which would become one of the seminal recordings in heavy metal history and spawn classic songs like "Crazy Train" and "Mr. Crowley." He went on to surpass his former bandmates in Black Sabbath, becoming the epitome of metal, while they faded into obscurity as a revolving door for musicians.

One of the primary reasons for Ozzy's success is the bands that he has built around him over the years. One thing fans count on from Ozzy is great guitar.

He found a soulmate in the early 1980s in Randy Rhoads, a virtuoso guitarist whose untimely death in a 1982 plane crash robbed the world of a promising talent. Rhoads' two albums with the Ozzman, "Blizzard of Ozz" and "Diary of a Madman" remain fan favorites and classics of the genre.

Though Rhoads' death hit Ozzy hard, he soldiered on, lining up flashy guitarist Jake E. Lee for his next two albums, "Bark at the Moon" and "The Ultimate Sin." While Ozzy and Lee produced some great songs, they failed to capture the same magic as the Rhoads albums.

But in 1989, Ozzy found another guitarist to fill the void, a fresh-faced kid named Zakk Wylde. The new guitar hotshot had his own unmistakable style, blending lightning fast licks with ear-piercing harmonic shrieks. His first album with Ozzy, "No Rest for the Wicked," was the fastest and heaviest of Ozzy's solo career, a sharp contrast to the more commercial "Ultimate Sin."

Nearly 15 years later, Wylde isn't so fresh-faced anymore (in fact, he's pretty grungy-looking), but he's still Ozzy's right-hand man. He's been partially responsible for some of Ozzy's greatest musical triumphs, including the critically-acclaimed 1992 release "No More Tears" and the highly underrated 2001 release "Down to Earth."

But there have been a few potholes in the road to success for Ozzy - his arrest for urinating on the Alamo in a drunken stupor, his attempt to choke Sharon in a drug-induced rage, a lawsuit brought by parents who claimed his anti-alcoholism anthem "Suicide Solution" caused their children to kill themselves and, of course, the legendary bat-biting incident.

"No matter what achievements I make in my career, I will always be known as the guy who bit the bat's head off," Ozzy said in a 2001 interview with the Associated Press. "Even the Rock and Roll Hall of Fame considers my career a joke because of it."

Indeed, that could have something to do with the reason Black Sabbath has been passed over for induction time and time again, despite the obvious influence they've had on music. But it's not the Hall of Fame that Ozzy cares about, it's the oceans of chanting fans that pack venues wherever he plays - the fans that have allowed him a 30-plus year career. He's never deserted them, and they've never deserted him.

Evidence of that can be found recently, when his insurance company refused to cover a June 11 show in Toronto, because of the SARS scare. Ozzy played the date anyway.

"I'm not afraid of SARS," he said in an interview with Much Music. "I have a commitment and somebody needs to be there for the fans in Toronto."

Despite the ups and downs of his career, and even a temporary retirement in 1992, Ozzy has made one of his biggest contributions to rock `n' roll in the late 1990s with the launching of his annual Ozzfest tour in 1996. The shows, which pair established, big-name hard rock and metal bands with some of the top up-and-coming groups, have been among the top grossing summer tours every year. Now in its eighth year, Ozzfest has helped launch the careers of some of today's biggest hard rock acts, including System of a Down, Static-X, Powerman 5000 and Disturbed.

Ozzfest also gave the world the moment metal fans had been waiting 20 years for in 1999 and 2001, when the reformed original lineup of Black Sabbath headlined the tour.

All of these things and more have combined to give Ozzy one of the largest, most dedicated followings of any rock band on the planet. But there's an easier way to explain it. Just ask any fan, and they'll give you a much simpler answer - "Ozzy (bleeping) rules." Indeed, he (bleeping) does.
Posted by Fred Phillips at 11:24 PM