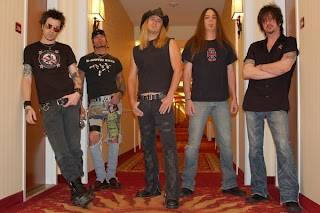 Even though he joined the band more than 3 years ago, vocalist Johnny Solinger is still "the new guy" to many Skid Row fans. These days, he doesn't mind it so much, though.

The group is currently crossing the country with Poison and Vince Neil of Motley Crue, and they've got a new album and DVD on the way in August. For a band that hasn't released an album of new material since 1995's "Subhuman Race," it's a whirlwind of activity, and Solinger can't wait for it to reach a fever pitch.

"I've been waiting for this for a long time," he said. "With all the touring we did to keep food on the plate, we had to work on it in between, so it was a long time coming. We finally got it right, and we finally got the record we want to put out. I just can't wait."

After more than three years of singing someone else's songs, Solinger said it will be nice to have a Skid Row record that he's played a part in making. But the worldwide release of "Thickskin" means even more to him.

"I'm an old hat at making independent records and trying to sell them to make a living, but to be able to go to the four corners of the Earth, wherever you buy records, and have me on a record, it means the world," he said. "It's like finally I've arrived. That's awesome."

Solinger was fronting his eponymous band in Dallas, which had attained moderate regional success, when he got an e-mail from Skid Row founders Rachel Bolan and Dave "Snake" Sabo in late 1999. They were looking to put the band back together and needed a replacement for departed singer Sebastian Bach (real name Sebastian Bierk). Solinger auditioned in January 2000 and about six weeks later he found himself opening for Kiss on a worldwide tour.

Though most fans of Skid Row consider Solinger's predecessor to be one of the best singers in rock, he said the challenge of filling those shoes never bothered him. He said the fans saw his confidence and warmed to him quickly.

"Everybody was kind of nervous about that, thinking there were going to be picket lines and sit-ins," Solinger joked. "But you know what? That just didn't happen. I'd say 99 percent of the fans are really cool with it, and if they're not, they don't come. It was actually a pretty easy transition."

He also looks forward to returning to the Smirnoff Music Theater in his hometown of Dallas on every tour. He said the homecomings are always fun.

"The audiences are always great in Texas, and I love that venue," he said. "I saw concerts there when I was in junior high and high school, so playing there means a lot to me."

Skid Row will play two songs from the new album, "Thick is the Skin" and "New Generation." Solinger said they've been playing them for the entire tour, and fan reaction so far has been good. People are even singing along with "Thick is the Skin," which is available in MP3 format on the band's Web site.

"I think it's cool, and the crowds are responding well to songs they haven't really heard before," he said. "We're the only ones out here playing new material, so it's really working in our favor."

Not every song is pleasing every fan, though. The new album also includes a punked-up version of the band's hit "I Remember You." Solinger said the song does signal a changing of the guard in a way, but it really comes down to doing something fun. They began playing the version in rehearsals, then tried it out live before putting it on the new album.

"It was never meant to be a part of the record, it just kind of worked out that way," he said. "I think it takes a lot of cojones on the original members' part to do something like this. I know Rachel has gotten some flack, someone e-mailing him and saying `how dare you mess with my high school song.'"

Solinger said on days when they play headlining shows with a longer set, the band plays both versions.

These days, it's common for bands from the same era as Skid Row to throw together a subpar album quickly and go out on tour, but Solinger said a lot of love and crafting went into their upcoming album. In the end, he's proud Skid Row didn't take the easier route.

"We kind of did everything backwards," he said. "We toured and started really getting the chemistry together before we made the record. There's a lot of pride involved in this record. I just can't wait for everybody to get a chance to hear the whole thing, because it's really, really good."
Posted by Fred Phillips at 5:01 PM