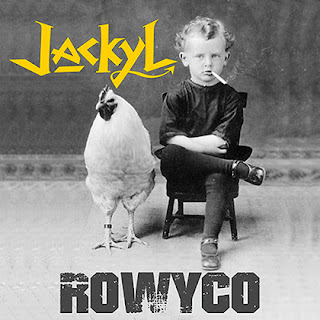 In case you’re wondering, the title of Jackyl’s latest album ROWYCO is an acronym for the phrase “rock out with your cock out” – advice that frontman Jesse James Dupree has been known to take quite literally. It’s also a phrase that pretty well sums up the band’s musical output over nearly 30 years, including the 10 rowdy tracks on this record.

I thought Best in Show, Jackyl’s 2012 outing, might possibly have been their best since the 1992 eponymous debut. So, ROWYCO had a lot to live up to. The songs on this one are not quite as punchy and immediately infectious as tracks like “Encore” and “Screwdriver” from that last album, but there’s still some really good stuff here.

Dupree knows what Jackyl does best, and that’s what he gives us: high-energy rock ‘n’ roll with plenty of attitude and raunch, and, of course, a good drinking song to go along with it.

The first four songs on ROWYCO fit the bill for the first part of that statement. Album opener “Disasterpiece” recalls some of the more mature (and I use the word loosely) tunes from Jackyl’s second album, Push Comes to Shove. “Rally,” featuring a pounding drum line from Chris Worley, overcomes the absurdity of Jesse James Dupree screaming “rally, rally, rally, rally” as the chorus with an even more absurd “oohgachugga, oohgachugga” backing chant. You might shake your head listening to it, and again an hour later when you’re humming “oohgachugga, oohgachugga.” “All Night Rodeo” is one of the catchier songs on the album, a pure party tune with a beat straight out of a 1970s porno — with the jangly funk guitars to go with it.

The country-tinged “Just Because I’m Drunk” fills the latter role, recalling at times a personal favorite Jackyl tune, “Secret of the Bottle.” Dupree takes his vocals completely over the top on the song, but that’s part of the charm of it. You can imagine him sitting at the bar, slightly sloshed and raising his bottle as he sings “just because I’m drunk don’t mean you’re right.”

There’s an interesting shift in the latter half of ROWYCO into some heavier territory. The big guitar riff from Jeff Worley that opens “Crazy” is the first sign. The tone of the song takes a bit of a darker turn than what’s come before, though that’s balanced by the humor in Jesse James Dupree’s Georgia drawl.

“Hammer to the Head,” the follow-up song, goes even heavier with a growling, grinding riff. Dupree takes a little of the redneck squawk out of his vocal and spends a lot of time in his lower registers. About halfway through, the song takes another turn into their more country-influenced sound, and that piece might be the most heartfelt and genuine minute or so of music to be found here. At the end of the day, no Jackyl song will ever be truly dark and angry — it’s just not in their nature — but this is about as close as you’re likely to get.

Of course, Jackyl can’t leave the audience on a low note, so they crank it back up with the final two tracks from ROWYCO. There’s not really anything I can say about “Limpdick” that the title itself doesn’t tell you: It’s rude and crude with Dupree at his most obnoxiously lovable and, of all things, a Kenny Rogers reference. It leads into the strangely placed “Blast Off,” which closes the album with, well, a blast — pure energy, pure fun and pure rock ‘n’ roll.

Arriving at the very end of the party-hearty 1980s hard rock scene was a stroke of bad luck for Jackyl. Though their debut went platinum on the strength of the Top 10 hit “Down on Me” and the chainsaw rock of “The Lumberjack,” the band quickly faded out of the public eye as the rock world got darker and more morose in the mid- to late-1990s. No matter what twists and turns music has taken, though, Jesse James Dupree has stuck to his guns and continued to pump out fun and raunchy Southern-fried rock ‘n’ roll. There’s a lot to be said for that, and ROWYCO is a great addition to that legacy.

Posted by Fred Phillips at 8:06 AM