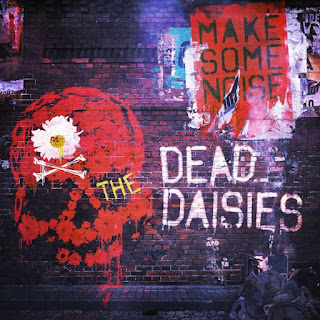 The Dead Daisies may have found their best lineup on their third record, Make Some Noise. For those not familiar, the band — which was founded by guitarist David Lowy and vocalist Jon Stevens (INXS) — features a rotating roster of all-star musicians. This time out, they’ve got vocalist John Corabi (Motley Crue, the Scream), guitarists Doug Aldrich (Whitesnake, Dio) and Lowy, bassist Marco Mendoza (Ted Nugent, Whitesnake) and drummer Brian Tichy (Billy Idol, Whitesnake).

While you’ve got three Whitesnake alums in the mix, the record sounds nothing like that band, though it is in the same ballpark — good, old-fashioned hard rock with blues underpinnings. The Dead Daisies don’t take themselves nearly as seriously as David Coverdale’s camp, though. Make Some Noise is pretty much party-ready, good-time rock ‘n’ roll from beginning to end.

Nowhere is that more clear than on the pounding title track, which is admittedly a bit silly, but still a lot of fun. Corabi spits rapid-fire references to classic hard-rock songs over a stomping piece that’s pure late-1980s cock rock. It’s not the best piece of music on the album by a long shot, but it does set the tone.

The sounds range from classic 1970s-style hard rock to punk-tinged pieces to raging 1980s sleaze rock. Regardless of the variation, though, almost every song on the record is a hook-laden, head-bobbing party.

“We All Fall Down” stands as my personal favorite track on Make Some Noise just because of that huge chorus which gets stuck in your head. It also sounds to me a little like Corabi’s underrated work with Motley Crue, particularly in the riffing after the chorus.

Speaking of riffs, Aldrich and Lowy fill the record with some fantastic ones. The slinky groove of “Last Time I Saw the Sun” makes my inner 16-year-old want to pop the collar on my leather jacket. The guitars get funked up a bit in the main riff of “How Does It Feel,” giving the song a bit of a different flavor. “All the Same” has a classic 1970s feel, and reminds me a little bit of the main riff from Ram Jam’s “Black Betty.”

The subject matter isn’t all good times, though. The AOR-style melodic rocker “Song and a Prayer” covers the well-trod territory of broken dreams. Lyrically, it might be a little bit of a downer, but the band manages to turn it into more of an inspiring message about overcoming adversity.

There’s even a cover thrown in for good measure, a chunky, driving version of Creedence Clearwater Revival’s “Fortunate Son.” It’s a song that’s arguably been overdone over the years, but it’s still interesting in the hands of the Dead Daisies — if for no other reason than Aldrich’s leads, which offer a slightly different spin on the original lines.

The Dead Daisies won’t blow your mind or change your world view with Make Some Noise, but they don’t intend to. What they want to do is get your foot tapping, and just maybe lift your spirits and make you feel good in a time where everyone seems to be angry and upset about something. In that, they succeed marvelously. If you’re looking to get the party started this weekend, you can’t go wrong with this record.

Posted by Fred Phillips at 1:20 PM