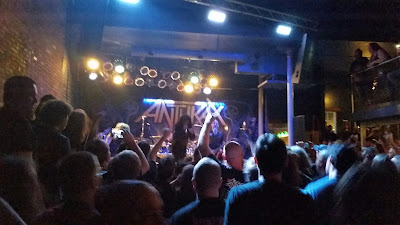 It was my first trip to the Riverside Warehouse in Shreveport, and I was a little surprised by the venue. I was thinking warehouse – a big open space. Instead, it’s a cozy, but cool little spot, with a bar out front and the performance area in the back, an open floor and a balcony above, with good views of the stage from just about wherever you’re at.

It was also my first time to see Anthrax as a headliner and the only time I’ve seen them since the late 1980s, when I caught them opening for Ozzy Osbourne. (I was supposed to see them once during the John Bush years, but they dropped off the bill at the last minute.) I was looking forward to hearing some old favorites and plenty of stuff off their latest, For All Kings, my current favorite album of the year.

Upon entering the performance area, I opted to go for the balcony, thinking my view might be better up above. Though tickets said the show started at 9 p.m., things actually cranked up around 8 with opening act Heavy as Texas, a band fittingly influenced by Pantera, but with some more traditional NWOBHM influences, too.

Billed opener Death Angel took the stage around nine, ripping through a high-intensity 45-minute set that was focused on more recent material from their last two albums The Evil Divide and The Dream Calls for Blood.

I go a long way back with Death Angel, almost as far as with Anthrax, to their 1988 release Frolic through the Park. This was my first time to see them live, and I was impressed, though I would have preferred to hear a few more classic tunes thrown into the set. I heard several calls for “Bored,” perhaps their most well-known tune outside fan circles, but in the shortened set, we didn’t get it. Still there were some fantastic performances, particularly on “Left for Dead” from The Dream Calls for Blood and “Lost” and set closer “The Moth” from their latest, The Evil Divide.

Then it was time for the main event, and despite a relatively short set – clocking in at just under an hour and a half – and some technical difficulties, I don’t think anyone left disappointed.

After Death Angel finished, I decided to move down to the floor for a bit closer view, and I was glad I did. Anthrax stormed the stage with a couple of tunes from For All Kings, opening with the bashing and intense “You Gotta Believe” to get the energy up in the room, and moving straight into personal favorite “Monster at the End.” Though the songs are fairly new, the crowd was into them, joining vocalist Joey Belladonna in belting out the chorus to “Monster at the End.”


But it was the third song in the set that worked the room into a frenzy – fan favorite “Caught in a Mosh.” As soon as the first notes of the tune hit, the floor erupted into a pit, with fans running from all areas of the venue to join in. The crowd shouted the chorus lyrics back at Belladonna with fire, and by the time it was over, Anthrax had the place completely in their hands.

From there, they burned through a set with plenty of mosh-happy, shout-along moments, hitting expected tunes like “Madhouse,” “Got the Time,” “Efilnikufesin (N.F.L)” and “Antisocial” along the way. There were a couple of treats for hardcore fans as well. They pulled “Medusa” from the 1985 album Spreading the Disease out of the archives, and a little later Belladonna left the stage as the rest of the band performed “March of the S.O.D.” from Stormtroopers of Death, the side project of guitarist Scott Ian and drummer Charlie Benante.

For me, there were a couple of classics noticeably missing from the set – “Among the Living” and “I Am the Law” – but their absence didn’t spoil the evening.

The only real hiccup of the night came during a performance of “Fight ‘Em Til You Can’t” from the band’s 2011 album Worship Music. Just before the guitar solo, the PA system lost power. The band played it off well, and at first, it seemed like it might be part of the act. Scott Ian quieted fans, then played a few notes unamplified, joking that we were going to have to be really quiet. Things were quickly up and running again, and after a brief discussion amongst themselves, Anthrax picked back up where they’d left off.

They delivered a few of those memorable, standout moments during the set – the kind that stay with you well after the ringing in your ears has faded. One came on “In the End,” also from the Worship Music album. The song was written as a tribute to “Dimebag” Darrell Abbott and Ronnie James Dio. On this night, they dedicated it to Dio, with Belladonna encouraging the crowd to throw up the late metal legend’s trademark horns, and they responded, waving horns high in time to the music.


The other was on “Be All, End All,” from Anthrax’s 1988 album State of Euphoria. As soon as Scott Ian played the first notes of the main melody on his Jackson V, the crowd picked up the chant, singing the melody back to the stage. It continued throughout the song, including an extended portion where Joey Belladonna urged the crowd louder. At least from where I was standing, it seemed that every voice in the place was raised.

To close the show, Anthrax returned to the new album for a performance of “Breathing Lightning,” and then their usual finale, “Indians.”

In recent years, I’ve said some pretty negative things about Belladonna, though he’s won me back over with his performances on For All Kings and Worship Music. I’d like to use this opportunity to take all of those things back. While his vocals weren’t perfect, he worked his butt off, and did impress at times. In fact, the whole band put on a hell of a show. While the audience may have been small due to the size of the venue, they were certainly dedicated, and the members of the band seemed to appreciate the response they were getting. These folks were here to see Anthrax, and they showed it.

You often hear bands and fans talk about intimate shows, but this one truly was just that, and it was more than just the size of the building. There was an energy and camaraderie in the place that you just don’t get in an arena. For about an hour and a half, I was a teenager again – banging my head, pumping my fist and shouting along at the top of my lungs. I didn’t care about anything but getting caught in a mosh. For a 40-something with bills and stresses, that’s something you just can’t put a price on. It was easily one of the best concert experiences that I’ve had in a long time, and here’s hoping that Anthrax returns to the Riverside Warehouse soon.

Posted by Fred Phillips at 8:00 AM