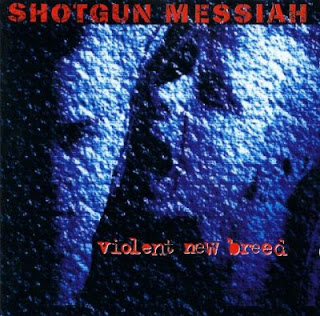 In 1993, I had little to no interest in Shotgun Messiah.

I considered them one of the also-rans of the late 1980s glam metal scene. Their previous two albums hadn’t connected with me, and they were part of the great same-looking, same-sounding mass that I considered responsible for the downfall of the 1980s hard rock scene.

Then I heard the title track from this album, and I immediately sat up and paid attention. “Violent New Breed” was definitely apropos for the sound of this record. The song opened with a thumping industrial drum beat and exploded into a guitar riff heavier than anything that had been heard on any previous Shotgun Messiah album. Singer Tim Skold traded in his glam style for a distorted, attitude-laden snarl, and then there was that huge, powerful chorus. It just makes me want to raise a fist in defiance, and 20 years later, I can still not listen to this song at anything less than the maximum possible volume.


This, I thought, is what a band called Shotgun Messiah should sound like.

By this point, the original band was down to two members — Skold and guitarist Harry K. Cody — and they decided to completely reinvent their sound, bringing in Skold’s burgeoning interest in industrial music and making their previous dabblings in punk more prominent. It’s a statement that’s made clear on opening number “I’m a Gun.” It blasts out of the gate with a slashing guitar riff, and you can almost hear the sneer in Skold’s voice as he delivers the vocal.

If you listen closely, you can hear the band’s glam rock roots. It’s in the basic melody of a song like “Come Down” and the gang vocals on the chorus of “Monkey Needs” or the sleaze rock of “Sex,” but it’s rendered nearly unrecognizable, drenched in electronics, heavy distortion and rage at the state of the world.

More often than not, though, the drums are pounding, the guitars are heavy, and Skold and Cody are pummeling the listener over the head. “Side F/X” for example, would be quite appropriate on a Ministry album, or perhaps KMFDM, who Skold would later join.

For me, crushing riffs like the one on “Revolution,” high speed ragers like “Enemy in Me” and the blend of heavy industrial and groove on “Jihad” were, ironically, finally able to make me a fan of Shotgun Messiah while so many fans of their earlier work rejected it. I was drawn to the fact that they were able to bring a little bit of that party rock vibe to a heavier, industrial album, maintaining catchy melodies and accessibility while delivering a wall of distorted, electronic sound.

Though I’ve revisited them a few times, I still don’t like the band’s first two records, but you can have my copy of Violent New Breed when you pry it from my cold, dead fingers.

Posted by Fred Phillips at 3:11 PM