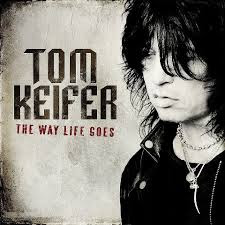 A 10-year long journey for Cinderella frontman Tom Keifer came to fruition with the release of his first solo album, The Way Life Goes. A long time in the making, the album is probably the most varied effort of Keifer’s career, and covers a wide range of feelings, emotions and life events during that time.

The album starts, really, where it has to with first track “Solid Ground,” a hard-driving rocker that would have been right at home on a Cinderella record — Long Cold Winter, perhaps. After that, though, it takes a more personal direction, with styles ranging from heartfelt ballads, to pop pieces, to blues rock, to even some country-flavored numbers. There’s a lot of Stones, a lot of 1970s Aerosmith, some Cinderella and a little bit of twang, too.


There’s no formula to the lineup of the album. Second track “A Different Light” finds Keifer showing off some of the newfound stylings in his voice thanks to rehab and training from a paralyzed vocal cord. On the chorus, he hits a high falsetto that’s not quite like anything fans have ever heard from him before. It’s one of the more pop-oriented songs on the album, but still quite pleasing.

One of my favorite choices in the track listing is the juxtaposition of “Cold Day in Hell” and “Thick and Thin.” The first, which is my absolute favorite track on the album, is another hard rocker with Keifer blowing on the harmonica and lyrically telling off the woman that did him wrong. It has an infectious chorus, as Keifer sings “It’ll be a cold day in hell, freezing in July, the devil back in heaven pissing money from the sky” before he takes her back.

Hard on the heels of that song is probably the most sincere love song of his career, written for his wife Savannah Snow when she was going through a tough time. It finds Keifer behind the piano again, where he’s shone brightly in the past, and riffing all over the place vocally.

And as far as those vocal problems go? Forget about it. Keifer’s voice is different here. There’s no denying that. He still hits that raspy screech you recognize from Cinderella on occasion, but he has far more moods and nuances now. I find myself agreeing with Keifer’s own assessment that his voice is, possibly, better now than it was before.

There are a lot of more somber moments on the album. The country-inflected “Ask Me Yesterday,” I could see being a crossover hit for Keifer, but it’s a far better song than most crossover hits. “The Flower Song” seems to be written for a slightly different audience than his norm, maybe the audience many of his Cinderella fans have grown into. There’s certainly a bit of a latter-day Stones ballad to it, though. It doesn’t lose the brash rock ‘n’ roll attitude entirely.

There’s also still plenty to please fans of his older work. Keifer hasn’t forgotten how to rock over the years, and he goes at it hard here, especially on numbers like the Aerosmith-influenced “Mood Elevator,” which finds him yowling like a cat in heat over a raucous rocker. “Welcome to My Mind” is one of the more interesting tracks on the album, with a slinky, bluesy guitar riff and a cool vocal effect on the chorus that has Keifer’s voice phasing through the speakers. “Ain’t that a Bitch” swings with a funky little groove that’s part Aerosmith, part Tom Petty and part Stones, and “Babylon Life” is pulled straight out of the 1980s glam rock scene.

Somewhere in between lie “Fool’s Paradise” and the title track. “Fool’s Paradise” has a mean groove to the verse before moving to a more pop-influenced chorus that’s reminiscent of the second coming of Aerosmith. “The Way Life Goes” is a blues rock honker that will almost certainly put you in mind of Aerosmith in their prime — think “Uncle Salty.” In fact, I would have loved to hear a Steven Tyler duet on this tune, but it’s a great song as is.

Cinderella fans have been waiting quite a while for some new music out of that camp, and while it may be a while yet before there’s anything new under the band’s name, they should be more than happy with Keifer’s solo album. It has a lot more variety and it’s a little more personal, but it’s a strong record filled with powerful moving moments, as well as some just plain fun party rockers. I’ve missed Keifer’s songwriting over the years, and it’s better than ever on The Way Life Goes.

Posted by Fred Phillips at 2:57 PM