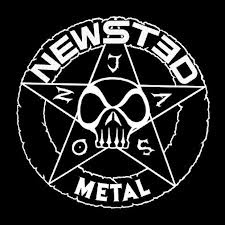 Since leaving Metallica, Jason Newsted’s record hasn’t exactly backed up statements that he was into heavier music and how things might have changed during the dark period of Load and Re-Load if the bassist had more input.

First we had the lightweight alternative act Echobrain, which I tried to block out of my memory until a friend reminded me of it when I wrote a sneak peek on the first track from this EP a while back. Then there was Rock Star Supernova, a band that also featured Tommy Lee (Motley Crue) and Dave Navarro (Jane’s Addiction, Red Hot Chili Peppers) and was created for a reality show. Not a sterling track record for a more-metal-than-thou guy.

After a stint in Canadian metal legends Voivod, Newsted disappeared for a while before re-emerging late last year with his eponymous band and hints of new music coming.

Our first taste was the blazing thrash track “Soldierhead,” which I have to say impressed me. Sadly, it’s far and away the best song of the four on this EP.

There’s not anything really bad about this record. There are good guitar riffs and Newsted is a passable, if not powerful, vocalist. But it’s just not that interesting. Most of the songs, in particular “Godsnake” and “Skyscraper,” wear out their welcome long before they’re over and just never really go anywhere. In pieces, there are some interesting moments, but as a whole my response is a resounding “meh.”

Aside from “Soldierhead,” “King of the Underdogs” is really the only track I kind of like. It opens with this gloomy, doomy piece that’s maybe a holdover from his Voivod days. When the heavier part kicks in, Newsted delivers his best vocal performance, a growly shout over a staccato guitar riff. A heavier part toward the end of the song brings a punkish influence that leads to a groove riff and a lead guitar with kind of a sci-fi movie sound that I also like, but then it keeps going for close to two minutes and, like the other two songs, it wears out its welcome.

So, the verdict? Not counting Voivod, it’s probably the best of Newsted’s efforts since leaving Metallica, but it’s certainly not what I was hoping for and not what “Soldierhead” promised. It’s interesting enough that if he releases a full record at some point, I’ll probably give it a listen, but I’m certainly not waiting on it in anticipation.

Posted by Fred Phillips at 6:24 PM