Review: T&N, "Slave to the Empire" 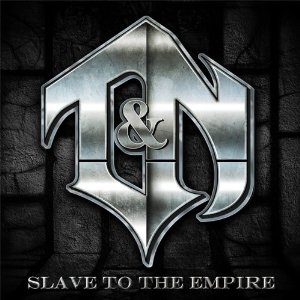 What do you get when you mix the three original members of Dokken who were not named Don Dokken with drummer Brian Tichy and guest shots from a few of the best singers in the hard rock realm? A surprisingly solid and vibrant record.

Guitarist George Lynch and bassist/vocalist Jeff Pilson originally began writing the songs on Slave to the Empire as a new project for Lynch’s band Lynch Mob, but realized they weren’t quite right for it. They eventually recorded the seven original tracks on this record with Tichy, who was the one that suggested a reunion with Dokken drummer Mick Brown and a project in the vein of the Black Sabbath offshoot Heaven and Hell. The three former bandmates seized on the idea, calling themselves Tooth and Nail, a name that for legal reasons had to be shortened to T&N.

The “covers” are quite interesting. Bach and Owens, as expected, knock their performances out of the park on songs that seem tailor-made for them. Bach hits the high smooth tones of ballad “Alone Again” with a style that’s sure to make Don Dokken secretly a little jealous, and Owens turns “Kiss of Death” – one of my favorite Dokken songs – into a much meaner, angrier song.

I was a bit unsure of how Pinnick would handle “Tooth and Nail,” as his vocal style doesn’t seem to fit, but it’s actually quite a good piece for him. His vocal brings a very different feel to the song, despite the fact that the band plays it pretty straight musically. The gang vocals get a little more oomph, and it’s just a tougher version.

Mason takes his turn on “It’s Not Love” and delivers a better performance than any from the most recent Warrant record. There’s a real classic-rock feel to the vocal.

The final cover is a fairly straight treatment of “Into the Fire” with Pilson on vocals. It’s not bad, but doesn’t really bring a different dimension from the original.

That, of course, brings us to the seven original tunes. Not being a huge fan of Dokken back in the day, I wasn’t expecting much. My initial interest in the record were the versions of proven tunes from their older band. I got quite a surprise with the new stuff, though. Certainly there’s a heavy link to their former work. Many of the songs here wouldn’t be out of place on any Dokken record. But then there are a few surprises.

One of my favorite songs on the record is the gritty, blues-rock infused “Jesus Train.” Pilson puts on a smoky, gruffer voice, and there’s a little bit of boogie mixed in. Of course, Lynch gets in his 1980s shred, particularly toward the end, but it brings a different dimension to the record.

If there’s a weakness here, it would be Pilson’s vocals. They’re sometimes pretty rough. A good example is the grunting growl on “Mind Control,” an otherwise pretty good hard rocker that just needs a little more power behind the vocals. Pilson’s better when he lets his bass do the talking, as he does on “Sweet Unknown,” laying down a great groove to base the song around.

And not all the vocals are a weakness. I particularly like his performance on “When Eagles Die.” He’s got a smooth delivery that’s a little reminiscent of the guy named Dokken on the softer parts of the song, and when the heavy stuff kicks in, he perhaps pushes it a little too hard at times, but it works.

Though some might complain that they’re trying to rehash past glories, Slave to the Empire is a solid collection of songs that should please fans of the classic lineup of Dokken

Posted by Fred Phillips at 3:28 PM