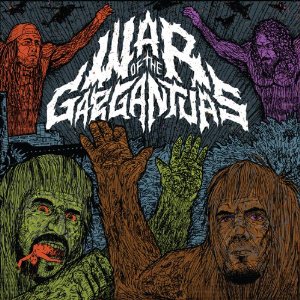 Warbeast, a Texas thrash/speed metal outfit which is out on the road with Down now, was one of the first signings to Anselmo’s label and rounds out this four-song collection with two abrasive, breakneck tracks — “Birth of a Psycho” and “IT.” Both are solid efforts, calling on the classic thrash sound of the 1980s, but bringing a modern edge to it. There’s a lot of Slayer, particularly in “IT,” but a taste of Pantera, too, along with some European influences.

The Warbeast tracks are a nice treat, but if we’re being honest, most of the people that snatched this EP up on Tuesday, myself included, did so for the two Anselmo tracks — “Conflict” and “Family, ‘Friends,’ and Associates.”

Over the course of his career and various projects, Anselmo’s track record has been a little spotty, at least to my ears. Side projects, like Superjoint Ritual and Arson Anthem, often rely more on aggression and rage than melody and musicality. But when the two come together with a little bit of balance, it produces great material. That’s the case here.

Of the pair of songs “Family, ‘Friends,’ and Associates” is my favorite for reasons that will probably be obvious to Pantera fans. Though the song opens with a slashing hardcore punk-influenced riff that would have been right at home on one of his Superjoint Ritual albums, it soon settles into far more groove-oriented territory.

Don’t get me wrong. It’s not Pantera. We’ll never have that again. Though it aspires at times, the squealing guitar doesn’t have the groove or feel of a “Dimebag” Darrell Abbott riff. That said, it’s the closest thing we’ve heard to Anselmo’s former band in 13 years or so.

“Conflict” is no slouch either. Though the guitar riffing is more in a thrash vein, it certainly has that groove thing going on, too. Anselmo’s vocal delivery puts me in mind, perhaps, of some of the heavier tunes on Far Beyond Driven or Great Southern Trendkill. Both of the tracks blaze with intensity and attitude and should excite Pantera fans.

Anselmo has said that his upcoming solo album, now tentatively scheduled for summer, will be more varied, mostly heavier and faster, and not at all like these two songs. If that’s true, it would be a shame. I could do with eight or nine more tracks like these. Either way, I’m looking forward to hearing more.

Posted by Fred Phillips at 6:20 PM