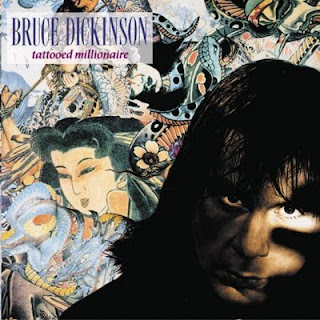 When Bruce Dickinson’s first solo album, Tattooed Millionaire, arrived in 1990, it left me — and I’m sure many other Iron Maiden fans — just a little confused. My initial reaction to this mixture of 1970s-inspired hard rock and 1980s excess was deep disappointment.

It was such a far cry from what I was used to from Dickinson, and I thought the simplistic song structures didn’t really allow him to use that amazing voice to its fullest. Luckily for me, during those years, a $10 cassette was a serious investment, so I rarely gave up on one without a fight. As I gave it more chances, many of the songs began to grow on me, and two decades later, I’m actually quite fond of the album.

Tattooed Millionaire was born when Dickinson was asked to do a song for the soundtrack of one of the Nightmare on Elm Street movies. The result was “Bring Your Daughter … To the Slaughter,” which was eventually recorded by his main outfit for their 1990 effort, No Prayer for the Dying. It was probably the least Iron Maiden-like track the band has ever recorded, and while Dickinson’s solo version of the song didn’t appear on this record until a re-release many years later, it does fit with the sound.

The title track and first single from the record announced the shift, fitting in perfectly with the glitzy hard rock scene of the time — the difference from most other efforts of the period being a huge, memorable chorus that owed to 1970s/early 1980s arena rock and made it impossible to get the song out of your head. The glam-rock influence, though, was also one of the hardest things for me to get past as a listener. I was used to hearing Dickinson’s voice tell very serious tales, whether it be a musical adaptation of a literary classic, retelling of a historical event or some sort of science fiction piece. Tattooed Millionaire brought a new side of him out that was silly and a little goofy with sex-filled romps like “Dive! Dive! Dive!,” “Lickin’ the Gun” and “Zulu Lulu.” Granted these aren’t even in the conversation about Dickinson’s best songs, but “Lickin’ the Gun” features a fantastic guitar riff from Janick Gers (who later replaced Adrian Smith in Iron Maiden and now serves as their third guitarist) and “Zulu Lulu” is just great fun.

There is a more serious side to the record, though, and that’s where it shines. Opening track “Son of a Gun” was one of the few that connected with me on early listens. It’s a dark semi-ballad with Western movie imagery that’s cool based on the story alone. Then the heavy part on the chorus kicks in, and Dickinson’s vocals start soaring as only he can. It’s not only one of my favorite songs on this record, but one of my favorite songs in his catalog. Then, there’s the more mainstream “Born in 58,” a heartfelt tribute to an earlier, simpler era that has zero bombast and a singer/songwriter type of honesty to it.

Not everything here works. “Hell on Wheels” is fun on its three-chord AC/DC-style verse, but the chorus seems to clash with the rest of the song, and “No Lies” — which sounds a bit like something from No Prayer for the Dying — just has never resonated with me. “Gypsy Road” goes for that same heartfelt ‘70s sound as “Born in 58,” but it’s not quite as successful.

Interestingly, the best song on Tattooed Millionaire doesn’t belong to Dickinson at all, but to David Bowie. The strongest performance by far in my mind is his cover of Mott the Hoople’s “All the Young Dudes.” This very faithful version of the song is easily the best of the many covers of the tune I’ve heard, and at the risk of alienating both Bowie and Mott the Hoople fans, I secretly kind of like it better than the original.

Over the years, Dickinson has been many things — a singer, an airline pilot, a fencer, an author — and his music has also gone through a number of phases. He followed this record with the very commercial Balls to Picasso in 1994, then with the strange and experimental Skunkworks in 1996 before reuniting with Smith and returning to his metal roots for 1997’s Accident of Birth. His three solo records since 1997 have all been more in the metal vein, and frankly, much better than most of the efforts he’s produced with Iron Maiden since reuniting with the band in 2000.

It may not have been what fans of Iron Maiden expected or wanted when it was released, but this record gave us the chance to learn a little more about Dickinson’s quirky personality — which, at the time, had been difficult to learn about members of the band. Tattooed Millionaire also holds up well today as a great collection of hard rock tunes.