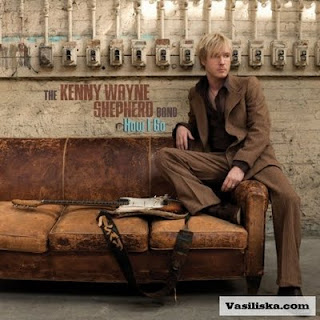 For a guy that once told me in an interview that he couldn’t seem to make everyone happy with his mix of blues and rock, Kenny Wayne Shepherd has done pretty well for himself.

Coming out of the gate as a 16-year-old kid schooled in the Stevie Ray Vaughan style of blues on his 1995 debut Ledbetter Heights, Shepherd met with mixed feelings in the blues community. There was no doubt that he had the chops, but some traditionalist blues fans felt that, as a teenager, he didn’t have enough life experience under his belt to play the music. Others thought there was a little too much rock in his sound. That seemingly ceased to matter in 1997, when he released the follow-up Trouble Is… which found huge mainstream success on the strength of the single “Blue on Black.”

For his fourth record, 2004’s The Place You’re In, Shepherd pretty much dropped the blues part of his sound altogether, sporting a black leather jacket and new hairstyle to make a full-on rock album. Then, in 2007, he successfully returned to the blues scene with the documentary “10 Days Out: Blues from the Backroads,” which found him talking and playing with blues legends like B.B. King, Hubert Sumlin and Pinetop Perkins, as well as regional heroes from Shepherd’s home state of Louisiana, like Clarence “Gatemouth” Brown and Buddy Flett. The doc was nominated for a pair of Grammys and won several awards from blues organizations.

Fast forward four years, and Shepherd is ready to unleash his latest studio album, How I Go, out Tuesday on Roadrunner Records. Interestingly enough, this record kind of completes the circle of Shepherd’s career so far. For the most part, it returns to the comfort zone of his first two releases – that rocked-out brand of Vaughan blues. Oh, there are some sidetracks from that sound. “Come on Over” returns to the rock noises of the 2004 release, playing a bit like a heavily blues-influenced version of King’s X. “Cold,” which features Shepherd’s vocals as well as his guitar, has a poppy feel. But by and large, the songs here are in the band’s wheelhouse. Fittingly so, with former Double Trouble drummer Chris Layton in the fold, and some guest work by bassist Tommy Shannon.

The album opens with the raucous boogie rocker “Never Lookin’ Back,” which will remind fans immediately of those first two albums. Vocalist Noah Hunt, who was one of the highlights of Trouble Is… in my opinion, makes his presence felt early after being seriously underutilized on The Place You’re In in favor of Shepherd’s own vocals. “Dark Side of Love” takes the record even further back to Shepherd’s origins. It’s one of those rollicking, high energy numbers that were among the best songs on his early albums. Shepherd smears the track with a little funk and plenty of horns and ends up with one of the strongest songs on the record. “The Wire” features a bouncing, high-energy guitar riff that’s quite catchy, but somehow a little annoying at the same time, and the blasting instrumental “Strut” ends the main part of the album with a bang.

Albert King’s “Oh, Pretty Woman” leads a group of solid covers on How I Go. The song has the kind of nasty groove that I wish the band would lock into more often. The down and dirty sound continues on a cover of The Beatles’ “Yer Blues,” while Shepherd goes for a more traditional sound on Bessie Smith’s “Back Water Blues” … at least for the first verse. After that, the song gets revved up with some more of those wailing Vaughan-style licks.

The slower pieces are a mixed bag. “Anywhere the Wind Blows” starts as a dark ballad, perhaps a bit reminiscent of “Blue on Black,” but it picks up for a memorable chorus melody. “Show Me the Way Back Home” has a bit of a country tinge musically, but Hunt’s vocals have more in common with blue-eyed soul. “Heart of the Sun,” on the other hand, has some nice mournful guitar licks, but never quite makes it where it’s going.

The special edition of the CD also features four bonus tracks. The best of the bunch are the high energy rocker “Butterfly” and another Vaughan-influenced piece “Cryin’ Shame.” As the parent of a young child, I also have to admit that I find the reference to the wheels on the bus in “Round and Round” somewhat amusing.

Though he returns to the sound, it remains to be seen if How I Go will put Shepherd back in the spotlight. There are some great songs on the album, but it’s a different world than when Trouble Is… came out in 1997. Regardless of what sort of commercial success it finds, How I Go, after a period of hit and miss, puts Shepherd back on solid and somewhat familiar ground. Fans of his early work should be pleased with a record that’s every bit the equal of those releases, and in some ways, perhaps, better.

Posted by Fred Phillips at 4:30 PM