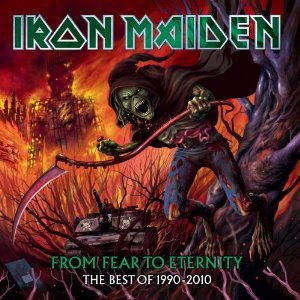 I’m wondering if Iron Maiden mastermind Steve Harris is, for some reason, trying to alienate fans. First, the band goes on tour last year playing primarily songs from its last four records and largely ignoring the classic albums that made them one of the top heavy metal bands in the world. Then came the lazy and uninspired The Final Frontier. (Yes, I know not everyone agrees with me, but it was really flat.) Now, we’re presented with yet another compilation album to try to suck money out of fans’ wallets.


My first reaction on seeing From Fear to Eternity: The Best of 1990-2010 was that I already have a two-disc best of set from those decades. I own 1992’s Fear of the Dark and 2000’s Brave New World, the reunion album with singer Bruce Dickinson and guitarist Adrian Smith. The other releases from that time period, while they all have their moments, are largely forgettable. So, I hoped maybe this would collect the best from all of those. No such luck. They hit some definite highlights, “Paschendale” from Dance of Death (2003), for example. But “Holy Smoke” from No Prayer for the Dying (1990)? Sure, it was a single, but I can think of a few better songs on that record. No “Dream of Mirrors” from Brave New World? And the inclusion of three songs from The Final Frontier, which is less than a year old?

What’s interesting is the handling of the band’s two records with singer Blaze Bayley. There are a few tracks from The X Factor (1995) and Virtual XI (1998), but they’re culled from live recordings with Dickinson. For the most part, I prefer the Dickinson versions, but it seems a little dishonest somehow to not even acknowledge Bayley. True, his voice didn’t work very well with the band, but, to me, those records are at least the equal, if not the betters, of the band’s last two or three outings.

From Fear to Eternity is kind of a pointless record. For the hardcore Maiden fan, there’s nothing new here to entice us. We’ve already got all of these songs on other albums – even the live ones. Newcomers to the band would be better served checking out their pre-1990 material. If, for some reason, you fell off the face of the earth after Seventh Son of a Seventh Son (1988), then this might be a good roadmap to tell you which of their later albums you want to check out. Beyond that, at least the cover is cool.
Posted by Fred Phillips at 5:55 PM