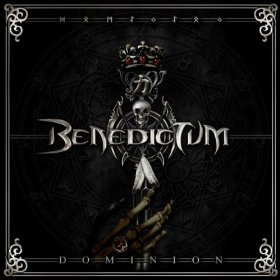 So Benedictum isn’t exactly a new band, but somehow they’ve flown under my radar until Dominion, their third release.

My first impression wasn’t the best, either. When the techno-dance beat at the beginning of the opening title track kicked in, I thought perhaps taking this record on was a really bad idea. But by the end of the second track, “At the Gates,” the band had won me over, primarily with the catchy chorus groove of that song.

At heart, Benedictum is a traditional metal act, and they’re at their best in that realm.
The verse of “Prodigal Son” has a nice dramatic feel, with perhaps a little bit of Dio-era Black Sabbath to it and an occasional flurry of faster licks. The chorus leaves something to be desired, but it’s still a solid song. “Dark Heart,” which follows a soulful and all-too-brief instrumental, “Beautiful Pain,” also has one of those big, memorable melodies. Guitarist Pete Wells also showcases his shredding skills on the two tracks.

When they venture out of that comfort zone and go for a more modern approach, as on “Grind It,” the results are mixed. There’s some nice bass work on the track by Chris Shrum, and even a couple of death growls, but I don’t find myself coming back to it as often as some of the other tracks.

On the other hand, “Bang,” a 1980s-style hard rock anthem is fantastic fun. It takes me back a lot of years, and though it’s just a little hokey with its “headbangers against the world” fists and finger in the air bit, I keep listening to it over and over. That chorus hook is absolutely infectious and begs for high volume.

The vocal delivery of Veronica Freeman is one of the more interesting parts of the record. Often, it seems, that she’s trying very hard to sing like a man. For the most part, I guess, I like that. I get really tired of all of the soprano female metal vocalists who don’t have enough grit for the music. Freeman doesn’t have that problem, though she also occasionally overdoes it the other way, pushing almost to the point of caricature. Quieter moments, like the verse of “Seer” or the ballad “Sanctuary,” offer some of her best moments. The vocals there are quiet and understated and leave me wishing she’d use that feminine side of her voice just a little more. I wouldn’t want her to completely to go that way, but for occasional use, it’s sometimes better than when she’s trying to push her vocals out there and be all bad ass.

I’m actually fairly impressed with my first taste of Benedictum. Dominion is a well put-together, catchy collection of traditional metal, and while there’s nothing jaw-dropping on it, there’s nothing that I dislike, either. I’ll definitely be checking out their previous two records.

Posted by Fred Phillips at 6:51 PM