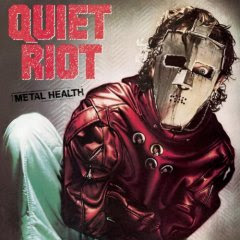 Even though I'm a little late on it, due to a busy week, I feel like I should still say something about the passing of Quiet Riot singer Kevin DuBrow earlier this week.


I was 11-years-old in 1983 and just reaching a place where I was beginning to discover my own music and move away from the music that my parents were listening to. One of the first bands that I discovered was Quiet Riot, and it was due, in no small part, to that memorable cover of "Metal Health" -- the guy in the leather straightjacket with the metal mask. It played right into the sensibilities of an 11-year-old kid, and even to this day, I believe there are few "more metal" album covers than that one.


So, while the world remembers "Cum on Feel the Noize" and maybe the title track from that record. I remember other songs. I remember the fun "Slick Black Cadillac." I remember the semi-ballad "Love's a Bitch," which seems a bit juvenile today, but at the time, I sang along with feeling, over and over. I remember "Thunderbird," their tribute to Randy Rhoads. I also still enjoy the cheesiness of their second record, full of would-be party anthems, and even the mainstream but catchy "The Wild and the Young" from the otherwise pretty dreadful "QRIII." (Though you certainly wouldn't have told me it was bad at the time.) In fact, they didn't lose me until they released the truly awful self-titled record in the late 1980s without DuBrow.


Quiet Riot was the first band that I ever labeled as "my favorite band," and they held that distinction for quite a while despite their fade. DuBrow will never be mistaken for one of the greatest voices in metal, but it fit the music. If you don't believe that, just try listening to that aforementioned self-titled record.


Though I never caught them live at the peak of my fandom, I was fortunate enough to see them at an ampitheatre show opening for Ted Nugent shortly after they reformed in the late 1990s and again in a local club a few years later. Though I no longer followed their recordings, I enjoyed hearing the old songs played, and both times they put on a high energy show. DuBrow, despite the obviously bad wig he wore both times, was just as flashy and flamboyant on stage as he had ever been and I enjoyed both shows immensely. I was also lucky enough to have the chance to interview DuBrow, who came across as just a normal, friendly guy, and meet the entire band after that club show. Though it didn't mean as much to me as it would have in 1983, it was still a great experience.


Perhaps in the larger metal landscape, where Quiet Riot never quite made the impact that they should have, DuBrow and the band may be viewed as just a footnote -- the band that scored the first No. 1 metal record. But for those of us who, at one time or another, sang along to Quiet Riot songs with great gusto, he will be missed.
Posted by Fred Phillips at 12:56 AM