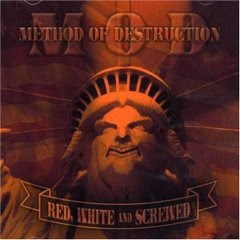 Though they were never one of my favorite bands, I grew up listening to M.O.D. in the 1980s, and I got a good chuckle out of their last record, 2003’s The Rebel You Love to Hate. You see, that’s the M.O.D. that I like – the tongue in cheek, bordering on goofy band that made fun of the 1980s obsession with image, that makes fun of white kids who think they’re from the ’hood, that makes fun of bands that take themselves too seriously. Here, though, on a few occasions it seems to me that Billy Milano is taking himself a little too seriously.

There's still some fun to be had with the name-dropping “Alphabet City Stomp” and “The Greatest Lie Ever Told,” which opens with a Tenacious D-like intro then takes shots at Metallica and King Diamond (and features Milano doing a pretty funny almost spot-on King Diamond impression.) Other humor numbers, like “Jose Can You See?,” a tirade against illegal immigrants, don’t work quite so well. There are also plenty of nods to other bands scattered around the record, most notably a tip of the hat to early Suicidal Tendencies on “Bullshit Politics.” It makes me want to go back and pull out that first ST record.

M.O.D. has always brought a good mix of thrash and hardcore. For this record, though, Milano leans more on the hardcore side, and it has the same problem that I’ve always had with hardcore: To me, it all sounds the same. I readily admit that I’ve never really gotten hardcore, and I don’t understand it. To me, it’s all a chuggy riff and a guy yelling. Maybe what’s here is good, maybe it’s not, (though I do suspect real hardcore fans would find it a little too derivative) but there’s not much for a thrash guy like me to grab onto.

Red, White and Screwed isn’t a bad record, but I’m not likely to revisit it very often. I miss the fun of the band’s previous records, and the songs, for the most part are just mediocre. Still, you have to admire the fact that Milano speaks his mind, even when what he’s saying may turn off potential listeners. There’s something to be said for that.