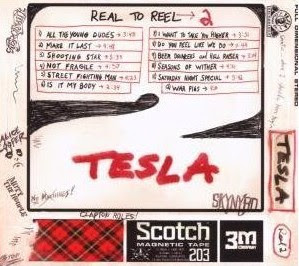 Tesla turns in a second round of cover tunes in less than six months. Being a Tesla fan from their early days, I took a look at the first volume and passed. There just weren't enough songs there that I cared about. This one interested me more -- at least until I heard it.

The band offers up pretty much note-for-note copies of the original songs that are usually not bad, but not at all exciting either. For the most part, the band makes it sound like the original, but there are some stretches here that singer Jeff Keith's voice just isn't right for, most notably ZZ Top's "Beer Drinkers and Hell-Raisers" and Black Sabbath's "War Pigs." Though I love Mott the Hoople's "All the Young Dudes," I just can't get into this cover. It's not as bad as the Ozzy cover a few years back, but definitely not as good as the Bruce Dickinson cover, which for me is the best version of the song.

Ultimately, this record is what it is -- a karaoke exercise with no real fire behind it. Like the first volume, this one's for hardcore fans only.

Read my review of Tesla's "Into the Now."