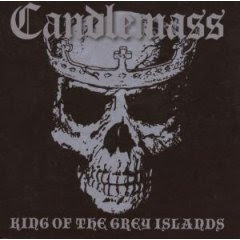 So, here’s the second record in Candlemass’ comeback bid, following up the excellent self-titled record from 2005, and not surprisingly considering the band’s history, already there’s a problem. Singer Messiah Marcolin is gone again. But you know what? If I’m being completely honest, that’s not really a problem. Enter Solitude Aeturnus singer Robert Lowe, exit the campy, mad monk, and this record actually gets a boost.

As much as I like Candlemass’ previous efforts, King of the Grey Islands, while not their best overall work, definitely has the best vocals of any of their records. Surprisingly, considering that he’s replacing a guy that wore monk robes, Lowe brings a little more of an unbalanced and manic energy to the songs. It's much less operatic and perhaps just a little more sinister at times. Then again, I’m probably a little biased, since I happen to love Lowe’s work with Solitude Aeturnus.

The record starts on a surprising note with an almost power metal feel on “Emperor of the Void.” It features a little of what we heard on the self-titled record, a little of those 1990s records when Candlemass was really Leif Edling and some other guys and a little of the classic sound all blended together. It also allows Lowe’s vocals to shine early in the record and gives listeners a hint of what they’ll hear later on. After that, King of the Grey Islands settles back into the gloomy and doomy goodness that we’ve come to expect from Candlemass’ best work -- sludgy Sabbath-influenced riffs that crush and groove, lyrics that tell a story and just a solid overall performance. Despite the lineup shift, there’s not a big change in the sound.

The riffs of Mats Bjorkman and Lars Johansson are great, trading off between sparse quiet reflections and undeniable power. Lowe’s influence shows up here and there on tracks like “Destroyer,” which have some Solitude Aeturnus leanings. It should be very interesting to see what happens when Lowe has a little more input on the songs. There are still plenty of doom epics here, perhaps the best being “Clearsight,” which after a galloping opening riff moves into more dramatic territory. Fans should also be pleased with the final track on the record, “Embracing the Styx.” Hell, fans should be pleased with just about every song here. It’s a great album, and it’s sure to be high on a lot of end of year lists, mine included.

Get "King of the Grey Islands."
Posted by Fred Phillips at 11:52 PM