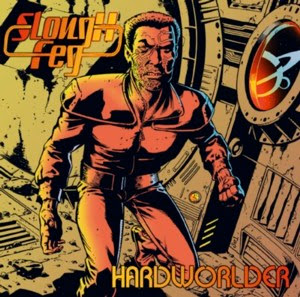 Critics rave about them, in-the-know fans on message boards sing their praises, but for some reason it seems that no one in the wider music world has heard of Slough Feg, and that's a shame. This is some of the best pure, unadulterated old school metal going. With one foot in the 1970s, the other in the 1980s, a hand in the future and one finger firmly extended toward the current musical trends, it's hard not to like them and it's even harder not to respect what they do.

Perhaps you could call their music a little old-fashioned, but I'd prefer to call it timeless. Remember the first time you heard Number of the Beast? Hearing a Slough Feg record is like that. Know how much you still enjoy Number of the Beast when you pull it out on occasion? In 25 years, I suspect a Slough Feg record will be just like that. Great music doesn't go out of style, and that's what makes this "old-fashioned" sounding record far superior to other retro bands that just copy the sounds. Slough Feg has the heart, soul and depth those bands lack. It's almost as if they were a band formed in the same moment as bands like Maiden and somehow transported through time - which would also fit right in with the themes of some of their songs.

Hardworlder blends traditional metal, power metal, doom, folk metal and 1970s hard rock into a potent cocktail that leaves the listener not quite knowing what might pop up next. There are epic folk-influenced numbers like "The Sea Wolf," where you can picture the salty dogs on deck waving a bottle of rum and almost hear the waves slapping against the boat. From there, you're transported to the futuristic jam session, "Galactic Nomad," which is heavily influenced by Thin Lizzy.

The real power here is in the guitar work of Michael Scalzi (who also handles vocals) and "Don" Angelo Tringali. The pair work the twin guitar attack like few before them - guys named Murray and Smith or Tipton and Downing. The band also manages to capture the spirit, feel and warmth of a late 1970s, early 1980s record without sacrificing the clarity or production values of modern recording.

After listening to numbers like "Tiger! Tiger!," "The Spoils" and the galloping "Insomnia," I have no doubt the band could do excellent covers of obvious tunes by Maiden and other big bands of the time, but that leads to another thing I love about this record. They do a couple of covers, but instead of trotting out the obvious, they go for more obscure songs that most listeners won't know. Here, they cover Irish rocker "Dearg Doom" by the Horslips, which is one of the best numbers on the record, and "Streetjammer" from Manilla Road.

Hardworlder is metal as it was meant to be played. If you're among those who aren't familiar with Slough Feg, do yourself a favor and check out the Try Before Buy feature at Cruz Del Sur's Web site to listen to the full record. You won't be sorry.


Get Hardworlder.
Posted by Fred Phillips at 10:19 PM