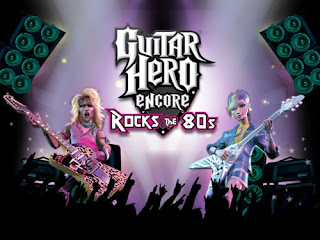 With the exception of the "Madden" football series, I rarely find a video game that comes anywhere near an addiction. (I'm in the 20th or so season of my Saints franchise in Madden '05, the most recent version I own.) Usually I get a game, play it a good bit the first week or two I have it and either finish it or hit a dead end. Then it goes on the shelf, and I may pull it out occasionally and give it another shot.

When I received "Guitar Hero II" as a Christmas gift, I'll admit, I got addicted. I lost hours of my life to this game. For those who are unfamiliar, the game comes with a plastic Gibson SG with five fretting buttons, a picking button and a whammy bar. You follow along with the songs in the game by hitting the appropriate fret buttons and the picking button. The whammy is used to pick up power-ups. The most surprising thing to me, being as I could play many of the songs in the game on my real guitar, was that, often, the songs are tougher to play on the game than in real life.

So, when "Guitar Hero Encore: Rocks the '80s" was announced, I had to get it as soon as possible. After all, I love the game, and I'm a child of the '80s. The song list covers most of the bases of the 1980s. There's the new wave sound with Oingo Boingo and Flock of Seagulls, the pop of The Go-Gos and Scandal, arena rockers such as Billy Squier and The Police and metal masters like Iron Maiden and Judas Priest. There are even a few off the wall choices, such as the fictional band Limozeen. (Then again, Spinal Tap and Dethklok, the band from Cartoon Network's "Metalocalypse," were featured in GHII).

The first thing you should know is that this isn't really a new game. With "Guitar Hero III" due out for the next gen consoles in October, this is more like a supplement to "Guitar Hero II" to hold fans over. The story arc of the game is the same as GHII, there aren't any new characters or twists, and the guitars you win by mastering the different levels are the same as GHII. I also miss the ability to buy more songs that you have in the last installment and there are fewer characters and costumes, but none of those are fatal flaws.

If there's one thing that's most disappointing about "Rocks the '80s," it's the brevity of the game. There are only 30 songs here. I breezed through the easy and medium levels in two nights. True, there were only 40 songs in GHII, but there were many more available to purchase with the points you earn through performances.
Though a few songs, like Twisted Sister's "I Wanna Rock" and Judas Priest's "Electric Eye," are originals, most of the songs, as in the first two games, are done by a cover band. That means a few of them are really bad. The vocals on this version of Dio's "Holy Diver" are cringeworthy, though to be fair, it's a bit tough to compete with Ronnie James Dio in the vocal department. Most of them are at least passable, and one or two (usually songs I didn't really like to begin with) I actually like a little better.

So, it sounds like I didn't like the game, which isn't true at all. It was just a little disappointing after the great GHII. It is what it is, an add-on to the game to give fans 30 new songs to play to hold them over until GHIII arrives. As far as gameplay goes, it's just as much fun as its predecessors and if you enjoyed them, you'll enjoy this installment. Here's hoping for a few more bells and whistles in October.

Get "Guitar Hero II" with guitar for PS2.